Investors reacted to media reports that described talks between the US and China as stalled following the White House's move this week to block Chinese telecommunications company Huawei from the US, which drew more confrontational rhetoric from Chinese government officials.

"It feels as though further discussions on trade have been put on hold," said Art Hogan, chief market strategist at National Securities.

"Today it seems the door is shut" to further talks, he added. 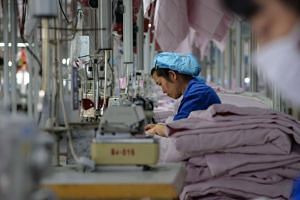 Tough talk from China leaves trade talks with US in limbo

US lifts steel, aluminium tariffs on Canada and Mexico in boost for trade pact

Worries about China ultimately outweighed two other conciliatory steps by President Donald Trump on Friday on trade: the lifting of steel tariffs on Canada and Mexico, and a six-month delay on tariffs on auto imports that have worried Europe and Japan.

Stocks retreated again after a mid-morning rally following a University of Michigan report that showed consumer sentiment at a 15-year peak.

Among individual companies, Deere & Company plunged 7.7 per cent after lowering its financial forecast for the year, citing "softening conditions" in the agricultural sector - which has been hit hard by Chinese retaliation.

Pinterest dropped 13.5 per cent on disappointment over its full-year sales forecast, which lagged some analyst projections.