All 11 major S&P sectors were down, with energy sliding 1.5 per cent on the back of a more than 3 per cent drop in oil prices.
Utilities, healthcare and consumer staples were among the smallest decliners in early trading.

Mr Trump’s tweet that he and first lady Melania had contracted the disease rankled global financial markets and sent investors scurrying to the perceived safety of the dollar, yen and gold.

Analysts said the news could hurt Mr Trump’s campaigning ability and jack up market volatility at a time when investors were already skittish after a chaotic presidential debate heightened fears of a messy transfer of power.

“And given that Trump does not adhere to conventional norms and rules, who knows what he’ll do in terms of postponing the elections.”
A senior White House official said the president is “not incapacitated” and will work from his residence.

After Mr Trump said he had the coronavirus, online gambling site Betfair suspended betting on the outcome of the election. Betfair’s odds had previously shown Democratic challenger Joe Biden’s probability of winning at 60 per cent on Wednesday.

The risk-off mood sparked a broad-based decline, with banks tracking Treasury yields lower and tech mega-caps, which generally tend to outperform at a time of economic uncertainty, slumping between 1.6 per cent and 2.3 per cent.

Safe-haven assets rallied, with the Japanese yen - a go-to in times of turmoil and uncertainty - rising to 105 per US dollar in Asian trading, from 105.60 earlier in the day.

The US dollar climbed against higher-yielding currencies including the Australian dollar and South Korean won, while gold initially jumped more than 1 per cent.

Meanwhile, yields on 10-year US Treasury bonds fell more than one basis point to 0.66 per cent, just above a one-month low, a classic signal of investors seeking so-called safe havens.

“We’re just a month to the election so this news does throw the election campaign into a disarray for the Republican Party,” IG Asia market strategist Pan Jingyi.

“Markets hate uncertainty and this ticks all those boxes,” said Mr Jeffrey Halley, senior market analyst for Asia Pacific with Oanda Corp. “Not because of the President alone, but because this potentially means it has spread to the upper-level echelons of the government in the US.”

Singapore's Straits Times Index closed down 0.2 per cent, after earlier falling over 1 per cent.

Holiday closures in the major China, Hong Kong and South Korea markets had earlier made for a subdued equity trading session ahead of the key monthly US jobs data later on Friday.

“We’re struggling to get our head around it because such things are clearly not in the manual of investment management.” said Mr Gary Dugan, chief executive officer at Global CIO Office. “(Mr Trump) could be isolated for two weeks so that may mean he calls an invalid election. This will induce nervousness in the markets and we could see a 10 per cent correction in US equities that will likely drag down Asian equities for the balance of the year.

“Longer term, people will see a sharper contrast between Asian and US equities. Asia has political stability and strong technology companies in the north. For people looking to allocate globally, this just makes Asia more attractive.”

Mr Sean Callow, currency strategist at Westpac in Sydney, said: "It has the potential to reduce Trump's campaigning ability. He's got a lot on and it's an interruption.

"It also hurts him as far as the whole narrative that it's really not much to worry about - it puts the Covid crisis itself back front and centre." 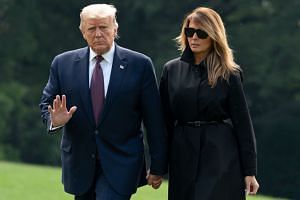 What happens if a US presidential candidate is incapacitated or dies before the election?

Mr Trump and First Lady Melania Trump were tested after Ms Hope Hicks, one of his closest aides, was found positive for Covid-19.

Trading on Wall Street turned choppy last month, with the S&P 500 snapping a five-month gaining streak, as economic data indicated a long road to pre-pandemic levels and Congress deliberated over the next round of fiscal stimulus.

With a bipartisan deal eluding House Speaker Nancy Pelosi and the White House, the US House of Representatives on Thursday approved a US$2.2 trillion (S$3 trillion) Democratic plan on fiscal aid, but objections from top Republicans are likely to doom the plan in the Senate.

Meanwhile, data showed US job growth slowed more than expected in September as the recovery from the Covid-19 slump shifts into lower gear, although the unemployment rate fell to 7.9 per cent from 8.4 per cent in August.

How the world reacted to Trump testing positive for Covid-19

The US dollar index jumped 0.3 per cent on risk aversion.

Oil prices extended losses to about over 4 per cent on Friday on the Trump news. West Texas Intermediate crude sank 4.3 per cent to US$37.06 a barrel.