NEW YORK (AFP) - Uber pulled back on its ambitious valuation target on Friday (April 26) for its Wall Street debut, while still pricing its share offering in a range that would make it one of the largest in recent years in the tech sector.

The ride-hailing firm said in a securities filing it would sell 207 million shares in a range of US$44 to US$50 dollars, raising up to US$10 billion (S$13 billion).

That would give Uber a market value of between US$74 billion and US$84 billion. Some media reports said the figure could be up to US$90 billion accounting for restricted stock options.

But the pricing target - still subject to change - fell below earlier ambitions of a valuation of more than US$100 billion for the firm operating in some 700 cities around the world.

Uber will trade on the New York Stock Exchange under the ticker "UBER" sometime next month.

It also announced a private placement of the tech finance firm PayPal of US$500 million.

In its filing, Uber estimated it lost US$1.1 billion in the first quarter of 2019 of US$1.1 billion on revenue of US$3 billion, continuing a trend of steep losses for the San Francisco-based startup.

Uber has become the largest ridesharing platform but has also been expanding into new segments including food delivery, freight, and "last mile" transport using electric bikes and scooters. 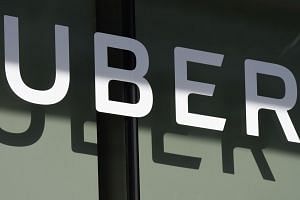 It is investing heavily in autonomous driving technology, in a move that could someday allow the company to offer "robotaxis" without drivers.

The IPO document said Uber aims to disrupt transportation by making it easier for consumers to move about without private cars.

The IPO pricing comes after a market debut stumble for Uber's US rival Lyft, which has lost more than 20 percent of its value since its initial public offering (IPO) last month.

Uber is the latest, and will be the largest of the so-called "unicorns," or venture-backed startups worth at least US$1 billion, to look to Wall Street listings to expand their capital base.

But some of the early enthusiasm about this unicorn herd has waned and there are hints that private investment rounds may have been priced too high.

"Uber is a company that is poised on a knife's edge," Damodaran said in a blog post.

"If it just continues to just add to its rider count, but pushes up its cost of acquiring riders as it goes along, and existing riders do not increase the usage of the service, its value implodes.

"If it can get riders to significantly increase usage (either in the form of more rides or other add on services), it can find a way to justify a value that exceeds US$100 billion."

Analysts warn both Uber and Lyft face multiple challenges to their business model, which has disrupted traditional taxi services and relies on drivers to be independent contractors.

Uber's filing said it had some 3.9 million drivers using its platform at the end of December, who have earned a total of US$78.2 billion since 2015 along with US$1.2 billion in tips, which were introduced on the mobile app in 2017.

Chief executive Dara Khosrowshahi, who took the helm in 2017, has promised greater transparency as he seeks to restore confidence in the global ridesharing leader hit by a wave of scandals over executive misconduct, a toxic work atmosphere and potentially unethical competitive practices.

Uber's filing also noted it is offering "driver appreciation" bonuses as part of the move to go public. It said US drivers who qualify would get awards ranging from US$100 to US$40,000 depending on the number of trips completed.

It said some 5.4 million shares, or three percent of the total, would be reserved for eligible drivers at the offering price, if they choose to participate.