SINGAPORE - The Asian operations of Toys 'R' Us' are unaffected by the toy store chain's bankruptcy filing in the United States, its joint venture partner said on Tuesday (Sept 19).

Its businesses in the region, including in Singapore, are run by a joint-venture company formed with Fung Retailing, a unit of Hong Kong's private Fung Group.

Toys 'R' Us (Asia), in which Fung Retailing holds a 15 per cent stake, is a separate legal entity and financially independent of all other operating companies worldwide, the management said in a statement. The main global company Toys 'R' Us Inc holds the other 85 per cent.

The Asian company's president, Mr Andre Javes, said: "Toys 'R' Us (Asia) is open for business and continuing to serve our customers as we always do.

"We are a financially robust and self-funding retail operation, which continues to significantly grow and invest in this region."

Along with its subsidiaries, Toys 'R' Us (Asia) runs more than 220 outlets in East and South-east Asia, with another 35 licensed outlets in the Philippines and Macau. It has 11 stores in Singapore with a staff of 350.

It brought the Japan unit into its fold in March 2017.

Toys 'R' Us Inc, the largest US toy store chain, filed for bankruptcy protection, comes just as the company is gearing up for the holiday shopping season, which accounts for the bulk of its sales. 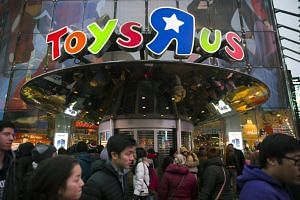 Crushed by online competition, Toys 'R' Us files for bankruptcy: 6 things about the chain

The filing is the latest sign of turmoil in the retail industry caught in a viselike grip of online shopping and discount chains, as more than a dozen significant retail chains made similar filings this year. Among them were Perfumania, apparel chains rue21 and Gymboree Corp, discount shoe chain Payless Holdings and designer clothing chain BCBG Max Azria Global Holdings.

Major retailers including Macy's and Sears have closed hundreds of locations as they struggle to compete with discounters such as Wal-Mart Stores and Amazon.com.

Amazon's recent acquisition of high-end grocer Whole Foods Markets stirred speculation that the online giant will use its pricing power and huge reach among US consumers to go after market share of traditional brick-and-mortar grocers.