NEW YORK (REUTERS) - Toys 'R' Us Inc, the largest US toy store chain, has filed for bankruptcy protection, the latest sign of turmoil in the retail industry caught in a viselike grip of online shopping and discount chains.

The retailer's operations outside of the US and Canada, including about 255 licensed stores and joint venture partnerships in Asia, which are separate entities, are not part of the Chapter 11 filing, Toys 'R' Us said late on Monday (Sept 18).

Toys 'R' Us Singapore is owned by Toys 'R' Us (Asia), a joint venture with Fung Retailing, part of Hong Kong's privately-held Fung Group. It has 11 stores in Singapore.

The US company said its Toys 'R' Us and Babies 'R' Us stores and e-commerce sites around the world are open for business.

“Like any retailer, decisions about any future store closings – and openings – will continue to be made based on what makes the best sense for the business,” Michael Freitag, a spokesman for Toys 'R' Us, said in an email. 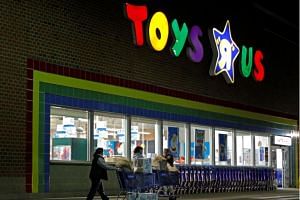 Toys 'R' Us still open for business in Asia, despite financial woes of US unit

The Chapter 11 filing is among the largest ever by a specialty retailer and casts doubt over the future of its about 1,600 stores and 64,000 employees in North America. It comes just as Toys 'R' Us is gearing up for the holiday shopping season, which accounts for the bulk of its sales.

"While today's decision does not necessarily mean it is game over for Toys 'R' Us, it brings to a close a turbulent chapter in the iconic company's history," said Neil Saunders, managing director of GlobalData Retail.

The company listed debt and assets of more than US$1 billion each in Chapter 11 documents on Monday in US Bankruptcy Court in Richmond, Virginia. Prior to filing, the chain secured more than US$3 billion in financing from lenders to fund operations while it restructures.

The financing, subject to court approval, reassures its suppliers they will get paid for their Lego building blocks and Barbie dolls that are being shipped for the holiday season.

"We expect that the financial constraints that have held us back will be addressed in a lasting and effective way," chief executive Dave Brandon said. "Together with our investors, our objective is to work with our debtholders and other creditors to restructure the US$5 billion of long-term debt on our balance sheet."

The company is saddled with debt from a US$6.6 billion buyout in 2005 led by KKR & Co and Bain Capital, together with real estate investment trust Vornado Realty Trust.

Toys 'R' Us has bonds coming due next year that have lost half their value this month, according to Thomson Reuters data, as investors have grown concerned about a possible bankruptcy.

The company opened a temporary store in New York City's Times Square this year to capture more holiday shoppers, almost two years after it closed its flagship store barely a block away, driven out by high rents.

"Vendors have cut them off based upon the rumours of the filing which has not been refuted," said Jay Indyke, a bankruptcy attorney with the Cooley law firm.

With assets of US$6.9 billion based on its most recent annual report, it's the second-largest retail bankruptcy, trailing the filing in 2002 by Kmart, which had US$14.6 billion in assets, according to research firm Bankruptcydata.com.

Major retailers including Macy's and Sears have closed hundreds of locations as they struggle to compete with discounters such as Wal-Mart Stores and Amazon.com. Amazon's recent acquisition of high-end grocer Whole Foods Markets stirred speculation that the online giant will use its pricing power and huge reach among US consumers to go after market share of traditional brick-and-mortar grocers.

Toys 'R' Us is the second-largest toy seller in the United States behind Amazon, according to consulting firm Kloster Trading Corp.

"What they have going for them is they are the last major player in their market," said David Berliner, a partner and restructuring specialist with BDO Consulting. "The vendors don't want to see them fail, so I think they have a good opportunity to survive."

Earlier on Monday, shares of Mattel and Hasbro, the two largest US toy makers, fell on concerns of such a move by their major customer before the holiday sales season.

Mattel, the world's largest toymaker, said in its annual report that it typically makes sales on credit, without collateral, and it warned that a bankruptcy filing by any major customer could significantly affect revenue and profitability.

Both Mattel and Hasbro get roughly 10 per cent of their revenue from Toys 'R' Us. In their 2016 annual reports, Mattel said payments on only 1.4 per cent of its total receivables was in doubt, while Hasbro cited 1.3 per cent.