LONDON (BLOOMBERG) - It's one of the world's most exclusive clubs, known over the years as the Syndicate, the Central Selling Organisation and the Diamond Trading Company.

For more than a century, De Beers has sold most of its rough diamonds to a select number of customers, a list that reads like a who's who of the opaque gem-trading world. Tiffany & Co, Graff Diamonds and Signet Jewelers Ltd all own subsidiaries in this group, guaranteeing a steady supply of gems with the pedigree of being vetted by De Beers.

In the diamond trading world, becoming one of De Beers's elite buyers is viewed as essential to achieving success and making money. Now, it's no longer so easy.

De Beers sells its gems through 10 sales each year in Botswana's capital of Gaborone, and the buyers - known as "sightholders" - have to accept the price and the quantities they're offered. It's a system that originated in the 1890s and designed to benefit both miner and customer, who receives the diamonds at a discounted rate.

But the discount has been shrinking. In some cases, the prices have been higher than the going trading rate, forcing customers to sell at a loss, according to people familiar with the matter. Some sightholders now struggle to make money from a business that was once highly lucrative.

The problems in the diamond industry are twofold. High-end jewellery sales are stagnating as other luxury offerings, like shoes, handbags and resort vacations, crowd the field. It's also harder for diamond trading companies to find financing because banks are abandoning the sector after being hit by frauds and bad loans.

"It's not an easy time right now, I'm not going to pretend it is and I'm not to pretend to my clients that it is," said chief executive officer Bruce Cleaver. He argues that demand remains robust, and millennials will covet diamonds the same way their parents and grandparents did. 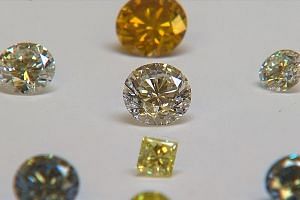 Buying a diamond, with more clarity on its source with help from Tiffany & Co

De Beers says it's also spending more on marketing and improving tracing in the supply chain as part of efforts to show the diamonds aren't fuelling conflict or broader human-rights abuses.

Even so, the relationship between De Beers and its sightholders is becoming strained, as the company keeps prices high even if it means selling fewer stones.

It's a change for an industry, where being one of the chosen buyers was long considered the highest achievement. So desirable was becoming a sightholder that some of De Beers's art collection, which lines its office hallways at its headquarters near London's Trafalgar's Square and includes works by David Hockney and Damien Hirst, were gifts from customers hoping to curry favour with the miner.

In a 2015 Financial Times interview, Graff chairman Laurence Graff said about De Beers: "If you want to be successful with diamonds, you have to get as close to them as possible."

That's less true now. For the 80 or so buyers operating from Belgium to Israel to India, the profit margins on trading diamonds have turned wafer thin or disappeared altogether. Many frustrated sightholders are refusing to buy at current prices, according to people familiar with the matter.

It's impossible to guess how much money some of the company's customers - which are almost-exclusively private companies - might be losing. For retailers, like Graff and Tiffany, trading and polishing diamonds is a tiny part of their overall business, and they're less affected.

But for the many specialist firms, the troubles have been harder to manage. Several have already gone out of business and Eurostar Diamonds, previously one of the biggest buyers of rough diamonds, was put into bankruptcy earlier this year. To be sure, the group has faced previous downturns and De Beers itself reduced the number of sightholders last decade from more than 100.

As its customers struggle, De Beers is also suffering financially. The company's parent, Anglo American Plc, saw first-half profit drop almost 30 per cent from the diamond business. Sales in the first six months of the year were at least US$500 million less than the same period of the previous three years.

Rough diamond prices have declined about 6 per cent this year, while polished stones are about 1 per cent lower, according to data from Polishedprices.com.

Sightholders face shrinking profit margins from buying from De Beers. The built-in discount they receive has been about 3 per cent in the past year. In some cases, it's been whittled down to as little as 1 per cent or they've paid more than they can sell them for in the secondary market, according to customers and others in the industry.

The narrow margins means profit on the boxes is wiped out after accounting for a 1.5 per cent value added service charge payable to De Beers and broker fees of about 0.5 per cent, they said.

It's a sizeable shift from the end of the last decade, when customers could consistently expect a discount of more than 5 per cent, according to the people.

De Beers has gone to unusual lengths to support its struggling buyers. The company this year loosened the rules for sightholders by letting them lower their annual quotas and defer purchases. It also says the pricing allows customers to make good-enough profits after averaging out market booms and downturns.

"I'm conscious that we need to help them ride out the storm," said Cleaver. "There are things we can do in the rest of 2019 to drive demand and to help customers add a bit more flexibility in their businesses."

There doesn't seem any looming good news. Dutch bank ABN Amro, one of the leaders in the industry's financing, recently wrote to clients saying it would no longer finance rough purchases if it wasn't clear a profit could be made on the stones. At the same time, some diamond boxes sold by Russian rival Alrosa PJSC this month are trading at steep discounts to the price Alrosa sold them for, according to the people.

"It's a perfect storm: you have too much supply, not enough demand," said Richard Hatch, a metals and mining analyst at Berenberg. "I can't see it improving anytime soon."