HONG KONG (BLOOMBERG) - Tencent Holdings is planning to raise around US$5 billion (S$6.78 billion) through a dollar bond sale on Wednesday (April 3), according to people familiar with the matter.

China's social media leader received an issuance quota of US$6 billion from China's National Development and Reform Commission, people who aren't authorized to speak publicly and asked not to be identified said.

Once priced this could become the biggest dollar bond offering in Asia excluding Japan so far this year, according to data compiled by Bloomberg.

Jane Yip, a spokeswoman for Tencent did not immediately respond to an email and text queries about the bond.

It plans to use about US$3 billion of the new bond proceeds to retire maturing debt, including the US$2 billion notes that are due in May, a company executive said in an investor call on Tuesday. Tencent last came to the dollar bond market in January 2018 when it priced US$5 billion four four-part offering.

The spread over treasuries on those bonds have risen since pricing, with premium on its 10-year tranche up by about 35 basis points.

Tencent is recovering from a bruising year of regulatory crackdowns as game approvals slowly resume. The company missed the mark on its earnings in the December quarter by most in a decade. 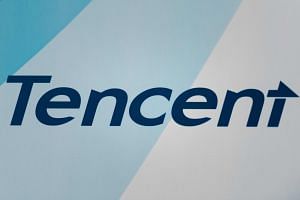 Will Chinese tech giant Tencent be next on the US' target list after Huawei?

Tencent weighing bid for part of Temasek's stake in Watson

To weather slowdowns in its core business and the economy, the owner of WeChat is spending billions to sustain growth with investments in everything from cloud and entertainment to retail.

Tencent's executives said during an earnings call in March that the company plans to continue to spend big for content acquirement and production as it locks horns with Alibaba Group Holding and iQiyi Inc for viewer time.

The WeChat operator overhauled its structure in September to capture opportunities in what founder Pony Ma brands the emergence of an "industrial internet."

It set up a cloud and smart industries division to spearhead its investments in areas from retail, connected cities and security to education, manufacturing and healthcare. The spending spree is diversifying its revenue make-up.