But Netflix's quarterly update, with results which fell short of most forecasts, pulled its shares down heavily in after-hours trade.

Shares slid 6.9 per cent to US$110.23 in electronic trades following the results.

Netflix said it added 3.6 million customers over the past three months as it readies launches next week for Spain, Italy and Portugal, and predicted it would end the year with 74 million.

Netflix, now available in more than 50 countries, has announced it would launch soon in South Korea, Singapore, Hong Kong and Taiwan, and has an ambitious goal of being in 200 markets in the coming years. 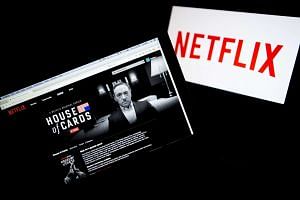 The US giant first made its debut in Asia earlier this year launching service in Japan.

"We remain on track to become global by the end of 2016," said a quarterly letter from chief executive Reed Hastings and finance chief David Wells.

"While global growth was as we expected, our forecast was high for the US and low for international."

The rapid expansion is likely to impact the bottom line at Netflix, which is leading the market for Internet-based television that can be streamed on demand.

The company said that it expects "to run around break-even through 2016 and to deliver material profits thereafter."

For the past quarter, Netflix posted a net profit of US$29.4 million (S$40 million) on revenues of US$1.7 billion.

While revenues grew 23 per cent from a year ago, profits were halved.

Netflix raised prices in the US and several other countries in the past week, saying it was needed "to improve our ability to acquire and offer high quality content."

It has been expanding its original content as it faces increasing competition from rivals such as Hulu, Amazon and HBO.

Netflix executives, believe that "linear networks that embrace on demand and Internet delivery as we have, will become more valuable and will experience renewed growth," the letter said.

"The secular shift to on-demand consumption is best described as 'consumers evolving versus old habits' rather than 'Netflix versus traditional media.' We're all racing to fulfill consumer desires."