SINGAPORE (THE BUSINESS TIMES) - StarHub is about to make changes in its organisational structure that could result in layoffs among its 2,500 employees in a bid to stay "agile and lean" ahead of new challenges, disruptions and threats.

"An agile and lean organisation to drive the execution of the business strategy is an important initiative," StarHub said in reply to BT's queries on Friday (Sept 28).

"StarHub will inform its employees when the organisational review and structure have been finalised and areas of efficiency are identified. StarHub will not be able to comment further prior to completing its efficiency exercise."

Like its rivals in Singapore, StarHub, the second-largest telco here after Singtel, has been bracing itself for even fiercer competition when a fourth mobile network operator - Australia's TPG Telecom - is expected to start operations later this year in what most analysts described as an "already crowded space".

StarHub is 55.8 per cent owned by Asia Mobile Holdings, a subsidiary of Singapore Technologies Telemedia. Japan's Nippon Telegraph & Telephone owns 9.9 per cent and BlackRock Fund Advisors 5 per cent. Singapore Press Holdings (SPH), which owns BT, has a 0.75 per cent interest.

The first hint of a possible staff cut was seen in the telco's fourth-quarter earnings. Staff costs rose by $11 million, or 15 per cent, to $84.7 million. These included "provisions for certain staff benefits in order to rationalise and retain talent in recognition of the business challenges and operating conditions".

StarHub - which offers mobile, cable TV, broadband and fixed network services - was listed on the mainboard of the Singapore Exchange in October 2004. It rose quickly within a year to overtake M1 to become Singapore's second-largest telco in the mobile space. 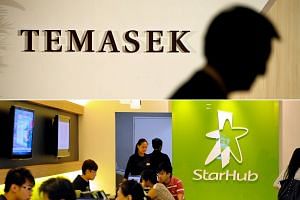 When it started operations, Singapore's mobile penetration rate was 48 per cent. It has now more than tripled to 148 per cent.

Currently, StarHub has a 26.7 per cent share of the domestic mobile market, compared with 48.1 per cent for Singtel and 25.2 per cent for M1. StarHub's share prices have gained 19 per cent in the past month, touching $1.93 a share on Friday, before settling at $1.87 a share.

Joel Ng, an analyst at KGI Securities Singapore, said Keppel Corp's and SPH's offer to buy M1 could be a re-rating catalyst for the telecom sector. The two plan to offer $2.06 a share for the M1 shares they don't own.

"Overall, we believe that as the telcos accelerate their digital transformations and leverage partnerships with strategic shareholders, valuations may see an upward re-rating over the next few quarters," he noted.

Analysts said Mr Kaliaropoulos, who took over as StarHub's CEO on July 9, 2018, believes digitalisation of enterprises is an external revenue opportunity and a means to improve marketing and cost control internally.

Mobile virtual network operator models on average, according to him, do not last beyond a few years as incumbents make adjustments to business structures and marketing plans.

"There is a possibility of industry consolidation two to three years out," said Luis Hilado, analyst at Maybank Kim Eng Research, which has a "buy" call on StarHub. UOB Kay Hian, too, has a "buy" on StarHub, with a target price of $1.92 a share.

"Execution has improved since Peter Kaliaropoulos took over as CEO on July 9. Within two months of his appointment, StarHub has scaled up in cyber security with the merger of Accel Systems & Technologies with Temasek's Quann World to form Ensign InfoSecurity," Jonathan Koh highlighted in a research note on Sept 25.