SINGAPORE - StarHub chief executive officer and executive director Tan Tong Hai will quit his positions from May 1, 2018, to pursue his “own interests”, the telco said in a surprise announcement after trading hours on Friday evening (Nov 17).

Mr Tan, 54, will have led the company as CEO for more than five years when he leaves. He also spent four years as its chief operating officer (COO) prior to that.

The group said it is engaged in a global executive search for a new CEO.

Mr Tan, in a statement released by StarHub, said he had achieved what he set out to do for StarHub and that is to grow its enterprise business. “I believe it is now the right time for me to step down to pursue my own interests,” he added.

He also said he would be working with StarHub’s board in its search for a CEO to ensure a smooth transition.

Mr Tan first joined StarHub in 1999 as general manager of StarHub Internet. He left to helm Pacific Internet and Singapore Computer Systems before returning to be the telco’s COO in January 2009.

He was promoted to CEO and executive director of StarHub in March 2013.

StarHub chalked up a number of firsts during his leadership.

Among them was his push for the launch of Singapore’s first free-to-cable sports channel SuperSports Arena in 2013, and in the following year, the start of the market-first integrated fibre and cable home broadband solution.

In 2016, it introduced its Cyber Security Centre of Excellence and this year, opened its innovation centre and converged operations named Hubtricity. 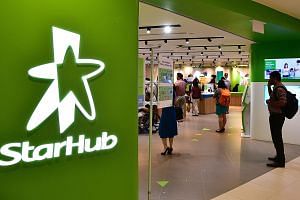 The company said Mr Tan was also instrumental in the acquisition and investment in such companies as mm2 Asia and Accel Systems & Technologies.

StarHub chairman Terry Clontz said Mr Tan was chosen to lead StarHub because of his experience in the enterprise, regional IT, Internet and e-commerce industries.

Under Mr Tan’s leadership, the group has grown its enterprise business “by more than twofold and has struck numerous strategic partnerships with established partners to give StarHub a global presence”, Mr Clontz added.

“At StarHub, Tong Hai is known for his pursuit of happiness for staff, shareholders and customers,” he said.

In its third-quarter results released earlier in November, StarHub posted a net profit of S$76.2 million, an annual decline of 11.5 per cent, as a result of lower takings from mobile, Pay TV and broadband services.