SINGAPORE (THE BUSINESS TIMES) - Singtel's wholly-owned subsidiary Optus on Tuesday (Jan 7) said it does not expect the financial impact of the Australian bush fires to be material at this time.

The situation has improved "significantly" from the weekend when 17 base stations were down, of which seven locations were confirmed as damaged due to fire, Optus chief executive Allen Lew said in a media statement.

"These sites will require partial or full rebuilds, but pleasingly, our intercity fibres that run through some of the impacted areas connecting Sydney to Melbourne are operational," Mr Lew added.

Other Singapore-listed companies have commented in recent days that they have seen no impact yet from the bush fires on their Australian operations.

Food company QAF on Tuesday said they have not affected the properties of its pork production business Rivalea Australia, nor materially affected its operations to date.

ComfortDelGro said on Monday night that none of its bus services in the stricken states of New South Wales, Victoria and Queensland are directly affected by the blazes.

Five other Singapore firms and Reits with assets in Australia said that so far they have not been affected by the bush fires as the country's metropolitan areas have so far been spared. They are Ascendas Reit, Frasers Property, Cache Logistics Trust, Olam International and Keppel Infrastructure Trust.

As for Singtel, a spokesman for Singtel told The Business Times on Mondday that the bush fires had disrupted parts of the Optus telecom network in the south-eastern states of New South Wales and Victoria.

Mr Lew on Tuesday night said that although a "small part" of the network in south-eastern Australia was adversely affected by fire damage and power outages, Optus was able to top up generators and bring in satellite base stations to provide communications in the affected areas thanks to favourable weather conditions in the past 72 hours. 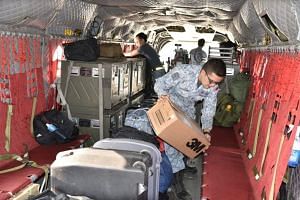 Optus is providing financial assistance to customers affected by the bush fires, it said in the media statement. This may include free call diversions, extended timeframes for bill payments, bill waivers, free suspension or cancellation of an Optus fixed services, or free prepaid credit.

In addition, given the spike in Internet use, Optus will provide unmetered access to emergency services websites for customers in bushfire-affected areas so that they can access information without exceeding their plans' data caps.

The bush fires are a live and evolving situation, and Optus is preparing for their impact to last for an extended period, Mr Lew said.

"Maintaining network service continuity and refuelling generators to support our network remain a priority, and while weather conditions evolve, our contingency planning will best prepare us for any additional challenges," he added.

Optus will continue to work with emergency services organisations in the affected states to monitor the situation.