It posted a S$668 million net loss in the second quarter, against a profit of $667 million in the same quarter last year.

Excluding Airtel, net profit would have been up 4 per cent for the quarter ended Sept 30, according to results released after the market closed.

Airtel was impacted by an adverse court ruling against the industry on the definition of "adjusted gross revenue" (AGR) for the Indian telco industry.

In the interim, Airtel has recorded an exceptional provision this quarter of approximately $5.49 billion.

Singtel's proportionate share of this provision amounted to $1.93 billion pre-tax.

But group chief executive Chua Sock Koong said that notwithstanding the court ruling, "Airtel has made positive strides in the wake of the recent industry consolidation, gaining market share, and increasing mobile service revenue for a third straight quarter".

The mainboard-listed telco's operating revenue slid 2.8 per cent to $4.15 billion, due mainly to a weaker enterprise business, which saw lower business spending, carriage erosion and headwinds in Australia. The consumer business across Singapore and Australia, on the other hand, had been "resilient".

For its full-year outlook, Singtel said consolidated revenue and Ebitda (earnings before interest, tax, depreciation and amortisation) - excluding NBN migration revenues in Australia for FY2020 and FY2019 - are expected to be stable. 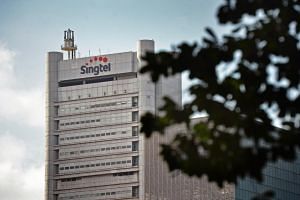 Capital expenditure is expected to approximate $2.1 billion, comprising A$1.3 billion (S$1.2 billion) for Optus and $0.8 billion for the rest of the group.

Ms Chua said: "The weak global economic environment has affected the industry although on a positive note, our diversified earnings base and our cost management have lifted our performance.

"While we expect current challenging conditions to continue into 2020, we will invest to strengthen our market position, enhance our core networks and build strategic capabilities to capture growth, and be 5G-ready," she added.