SINGAPORE - An exceptional $28.2 million gain from the dilution of interest in a Chinese associate boosted Singapore Post's (SingPost) results for its third quarter.

For the three months ended Dec 31, net profit rose 15.6 per cent to $50.2 million from $43.4 million for the year-ago quarter. This comes as 4PX ceased to be an associated company, after the group's shareholding was diluted by the issuance of additional 4PX shares to an existing shareholder of the China-based logistics company, SingPost said on Friday (Fb 1).

Profit on operating activities declined 8.5 per cent to $42.2 million as higher contributions from post and parcel, logistics and property businesses were largely offset by continued losses in the US, said SingPost.

Earnings per share stood at 2.06 cents for the quarter, up from 1.75 cents in the year-ago period.

An interim dividend of 0.5 cent per share has been declared by the board, which will be paid out on Feb 28.

On the back of higher peak season volumes, revenue grew 7.6 per cent to $441.4 million from a year ago. Revenue also increased across SingPost's four business segments, namely property, e-commerce, logistics, as well as post and parcel.

Notably, post and parcel revenue rose 9 per cent to $213.2 million, thanks to increased domestic and international e-commerce deliveries over the e-commerce peak season. 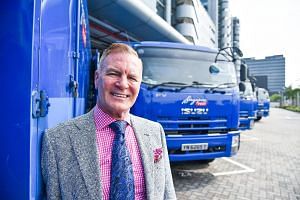 Driven by festive shopping in the US, SingPost's e-commerce segment also saw higher volumes, with revenue for the business segment rising 8.7 per cent to $82.5 million.

Looking ahead, SingPost expects its post and parcel business to continue benefiting from the growth in global e-commerce activities, and its property business to remain stable, though domestic letter mail volumes are expected to trend moderately downwards.

Nonetheless, the group continues to faces challenges in the e-commerce operating environment in the US, due to greater competition and rising customer bankruptcies, SingPost noted.

"The US businesses are underperforming, and are expected to remain loss-making in the current financial year. In view of this, there is a risk of impairment to the carrying value of the US businesses.

"Impairments, if any, will be assessed based on the full financial year results and future plans for the businesses," SingPost said.