SINGAPORE (BLOOMBERG) - Singapore Post is likely to wind down or sell its loss-making US e-commerce business after conducting a strategic review of the unit, according to a Bloomberg survey.

A potential divestment or shuttering of the business will bode well for SingPost's long-term profitability, according to four analysts covering the stock. Two brokers including CLSA have factored in benefits from a possible transaction in their earnings estimates.

The poll was conducted after SingPost said last month it saw an impairment risk to the book value of its US unit.

The company is now conducting a review of the business which is "expected to remain loss-making in the current financial year", Ms Mei Yu Hong, a company spokeswoman, told Bloomberg by e-mail on Feb 20.

"I am expecting an exit from US e-commerce business either by scaling down or a sell-off," said CLSA analyst Horng Han Low, who upgraded the stock to "buy" from "sell" on Feb 7 with a target price of $1.17. "Sentiment has been overwhelmed due to the loss-making online business even as management reversed the structural decline in the Post and Parcel segment," he said by phone.

The US e-commerce business, which helps US retailers including Speedo and Tommy Hilfiger manage online stores and package deliveries, has been a drag on SingPost's profit as the unit suffered losses in each of the last three years, a key reason why SingPost's market value has more than halved since a record high in February 2015.

SingPost, which counts Temasek Holdings and Alibaba Group Holding as its two biggest shareholders, bought majority stakes in US e-commerce companies TradeGlobal Holdings Inc and Jagged Peak for about US$184 million (S$249.6 million) in 2015. 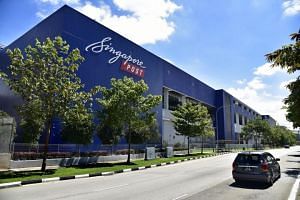 "The e-commerce operating environment in the US continues to be challenging due to intensifying competition and rising customer bankruptcies," SingPost's Ms Hong said. Impairments, if any, will be assessed based on full financial year results and future plans, she said.

CLSA's Mr Low said a potential impairment should be seen as a prelude to the exit from US e-commerce. Operating losses in the e-commerce unit widened to $13.3 million in the third quarter, compared to an $11.7 million loss a year ago, according to the company's filing.

Sticking to traditional businesses might work out better for SingPost as its mail unit has contributed the most to its annual operating income since 2010, according to Bloomberg data. The "US e-commerce strategy comes at a heavy price and would be costly to execute a turnaround. It has weighed on valuations and business outlook," Mr Low said.

The company is expected to report full-year earnings results in about two months. SingPost's 12-month forward price to earnings ratio has fallen to 20.8 from 21.9 at the start of 2018.

The end of the US unit is unlikely to have an "impact on the bread-and-butter" mail and package business, CGS-CIMB Securities analyst Ngoh Yi Sin said by e-mail. "Singapore Post will have to continue to manage its service quality for domestic mail, and overall margin for post and parcel business, while looking for new growth engines."

There is a 50 per cent chance that SingPost will end the US e-commerce business but an exit should provide an "immediate boost to its earnings", Mr Ngoh said.