Now he is keen to expand beyond his home base into South-east Asia. To do that, and to compete with his cash-rich rivals, he has hatched an audacious plan to unleash the efficiencies of blockchain technology on e-commerce.

Mr Ku says blockchain makes it cheaper to run an online marketplace, as it lets him remove the fees he currently charges merchants to sell products on the site. That, he says, should attract even more sellers.

He is also creating a payment system based on the technology that will help attract new shoppers in a region where cash still predominates.

So far, the response has been positive: Three months in, he says, more than 5,000 merchants have registered 2.3 million or so products on QuuBe.

Mr Ku isn't the first to try applying blockchain to e-commerce. But no company has gone all-in like Qoo10, which can't match the billions of dollars Alibaba Group Holding and Tencent Holdings are pouring into the region.

"This is my attempt to shift the paradigm and level the playing field," he says. "There hasn't been any radical innovation in the e-commerce industry-with services largely resembling one another."

Mr Ku is virtually unknown outside Asia. He keeps a low profile and has no social media presence. People who know him well describe him as an workaholic who rarely socialises.

He has built Qoo10 in his image: a low-key yet hard-charging upstart that retains a bootstrapping ethos despite being a nine-year-old company with 600 employees. The boss's Korean nickname is Ku daeri ("junior manager Ku") because few details are too small for his attention.

"People don't know him because he keeps a low profile, but he's probably the most underrated entrepreneur," says Mr Julian Tan, chief of digital business at Singapore Press Holdings, which backed Qoo10 in 2015.

Mr Tan says the fact that Qoo10 has managed to remain No. 1 in Singapore despite Amazon.com's entry with Prime Now in 2017 and heavy investments from Alibaba's Lazada and Tencent-backed Sea Ltd's Shopee "is a testament to his product and understanding of the market".

Mr Ku has long been an e-commerce pioneer. Back in 2000, when he was 34, he started a South Korean Web store called Gmarket. Three years later, consumers and merchants were invited to transact directly on the site - a concept that eventually came to be known as a business-to-consumer marketplace. 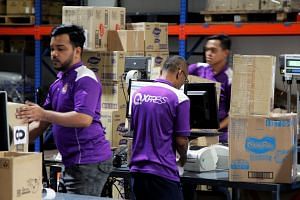 Higher profits, lower costs when you sell online on QuuBe

Mr Ku was busily building Gmarket into a pan-Asian e-commerce operator when his biggest shareholder, Interpark Corp, decided to accept an offer from eBay, which acquired Gmarket for US$1.2 billion in 2009. Mr Ku struck a deal with the US e-commerce company to form a joint venture and started Qoo10 in Singapore in 2010.

Qoo10 caught on quickly, enticing consumers with products previously difficult to get online - Korean cosmetics, Australian bath towels and Indonesian batik dresses. The company offered fresh salmon cuts and chili crab long before delivery apps came along. They could also be picked up at the seller's shop.

Wrapping the enterprise together was an efficient cross-border logistics network and a local delivery service that could get a package to a customer's door in as little as three hours.

Qoo10's share of Singapore's online shopping market more than quadrupled to 38.2 per cent from 2013 to 2018, according to Euromonitor.

The company has held onto its leading position without throwing money around. Since its inception, Qoo10 has raised a mere US$230 million (S$310 million) from investors. Tencent-backed Sea bled roughly the same amount every three months last year to expand Shopee. Alibaba, meanwhile, has pumped in a total of US$4 billion since acquiring control of Lazada in 2016.

Last year, Mr Ku sold Qoo10's Japanese business to eBay for an undisclosed sum - giving him ammunition to expand in South-east Asia. He's now in the process of combining local Qoo10 sites from Malaysia to Hong Kong into a single marketplace and plans to invest heavily in the cross-border logistics unit, Qxpress, which has operations in eight countries and 11 delivery processing centres. To add more centres, Qxpress is raising US$50 million to US$100 million in a new financing round that is expected to close this month.

For the time being, Mr Ku is staying out of Indonesia, South-east Asia's largest consumer market. He says it's too fragmented and that too many companies are chasing consumers with insufficient disposable income. Instead, he plans to expand to Australia, Thailand, the Philippines and Vietnam this year.

He knows it will be increasingly difficult to compete head-to-head with Lazada and Shopee, and expects blockchain will give him an edge.

The technology automates certain e-commerce transactions and processes that typically require humans. That's why Mr Ku can eliminate merchant fees and make it easier for anyone to set up an online shop. Blockchain also enhances trust among participants because they can more easily trace transactions from start to finish.

Meanwhile, the ledger offers an alternative, more secure payment method in a region where many shoppers lack access to financial services. Buyers and sellers use tokens called Q*coins, which are stored in a digital wallet in the QuuBe app. Q*coins are pegged to the US dollar and fully convertible with no extra fees. As more of the tokens circulate, Mr Ku says their value will appreciate - giving merchants another way to profit.

Success is hardly guaranteed. While Walmart is moving ahead with a project to track leafy greens, many previously enthusiastic companies have pulled back, partly because it is difficult to deploy the technology in real-life situations. Larger, expanding companies may not see the urgent need to apply a different strategy.

But Mr Ku is convinced blockchain will give him the necessary edge to compete and avoid getting into a cash-burning war of attrition.

"I want to show that we can prevail by using technologies," he says, "not by throwing money around."