SINGAPORE (BLOOMBERG) - Singapore doesn't plan to regulate cryptocurrencies such as bitcoin, but will remain alert to money laundering and other potential risks stemming from their use, the head of the country's central bank said.

"As of now I see no basis for wanting to regulate cryptocurrencies," Monetary Authority of Singapore managing director Ravi Menon said in an interview with Bloomberg News.

Rather, the central bank's focus is to "look at the activities surrounding the cryptocurrency and asking ourselves what kinds of risks they pose, which risks would require a regulatory response, and then proceed from there," Menon added.

Bitcoin's rally and the proliferation of other digital assets is attracting the wary eyes of regulators globally, though many central banks have still refrained from supervising cryptocurrencies themselves. China and South Korea have banned initial coin offerings, while Russian President Vladimir Putin has called for regulation of the sector.

"Very few jurisdictions regulate cryptocurrencies per se. Most have taken the approach that the currency itself does not pose a risk that warrants regulation," Menon said in a separate Bloomberg Television interview with Haslinda Amin.

Singapore already requires virtual-currency intermediaries such as exchange operators to comply with requirements to combat money laundering and terrorism financing, Menon noted in the Bloomberg News interview. "This will be formalised in the coming payment services regulation which we are working on," Menon said. 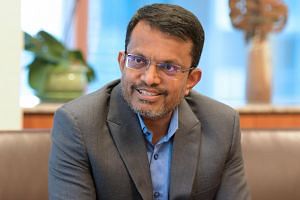 If ICOs include the promise of a dividend or other economic benefits, they can resemble regular securities offerings and would therefore be covered by Singapore's Securities and Futures Act, Menon noted. Other business models "avoid these security-like features in their digital tokens", he added.

"So we just have to look at them case by case to see which ones we will need to bring into the regulatory ambit, and which ones can stay outside," Menon said.

Among companies that have conducted an ICO in Singapore is TenX, which raised US$80 million in the city state in June. The Singapore-based start-up is pitching its debit card as an instant converter of multiple digital currencies into fiat money including dollars, yen and euros.