The start-up is looking to expand to other Asian cities, starting with Bangkok.

With the proceeds, the company is also aiming to ramp up growth in Singapore, and build infrastructure to support revenue of US$100 million, it said.

Singha Ventures is a corporate venture capital fund of Singha Corporation, that is part of Boonrawd Brewery Group. The group is a Thai conglomerate with a presence in the food and beverage (F&B), packing and property sectors.

The latest injection of funds includes a mix of equity and venture debt.

Sassoon Investment Corp is the family office of the Sassoon family, who are shareholders of The Coffee Bean & Tea Leaf, while Ozi Amanat/K2 Global is an investor in Impossible Foods, Spotify and Airbnb, among other companies.

Returning investors include Openspace Ventures, Raging Bull and Cento Ventures. Grain raised US$1.7 million in Series A funding in 2016. 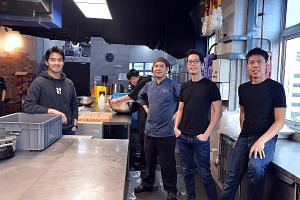 Founded in 2014, Grain offers everyday meals and catering, working with its own chefs, menu and delivery team.

Bhurit Bhirombhakdi, chairman of the executive board at Singha Ventures, said: "We see great potential in Grain, and believe that our collaboration will help Grain expand in South-east Asia, and realise their regional vision."

Specifically for Thailand, Grain will work with Singha to leverage its extensive F&B network across the country, including logistics and distribution, to bring new innovations to consumers, added Mr Bhirombhakdi.

Under this partnership, Grain will also be able to gain clearer insights of the target audience in Bangkok, which will help them develop better products and services, the company said.

Added Grain co-founder and CEO Yi Sung Yong: "Grain achieved profitability in December 2018. This is a huge milestone for us, because it proves that we have what it takes to be a sustainable company.

Its growth has placed them fifth among Singapore’s fastest-growing companies in a study conducted jointly by The Straits Times and Statista, the German online portal for market data and market research.

Said Mr Yong: "We want to disrupt the F&B landscape and evolve with consumer preferences, and at the same time have solid fundamentals. This is just the start."