SINGAPORE - The first half of 2019 saw a slight improvement in the level of female representation on the boards of listed firms here.

The percentage of women on the board (WOB) increased by 0.5 percentage point to 15.7 per cent among top 100 primary-listed companies by market capitalisation on the Singapore Exchange (SGX), said the Council for Board Diversity (CBD) on Thursday (Sept 12).

Five of these companies, which are already gender-diverse - ComfortDelGro, SBS Transit, Wing Tai Holdings, First Resources and SATS - each added a woman director.

All-male boards were reduced by four, to 21, after Wilmar International, Hong Leong Finance, CapitaLand Mall Trust, ESR-Reit and Singapore Airlines added a woman director each, and the addition of one all-male board during the period.

The top 100 IPCs by donation receipts remained unchanged for WOB at 27.4 per cent, but still fared the best among the three sectors.

While there was more to be done, some have achieved CBD's immediate WOB targets, it said. 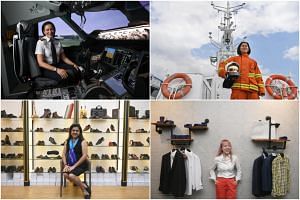 Women in male-dominated jobs such as firefighter and pilot

Of the top 100-listed firms, 36 have achieved the first-tier target of at least 20 per cent WOB.

CBD urged top 100 primary-listed companies and IPCs as well as statutory boards to lead the way and demonstrate the compelling benefits of having WOB to smaller organisations.

Following its establishment by the Ministry of Social and Family Development in January 2019, CBD has set a long-term target for equal proportion of men and women directors on boards.

In the nearer term, it set a target for top 100 SGX primary-listed companies to achieve the first tier of 20 per cent WOB by end-2020.

Top 100 IPCs and statutory boards are to achieve 30 per cent WOB as soon as possible, CBD said.

There are more opportunities to improve diversity through proactive, future-focused board refreshment, particularly with the nine-year tenure rule for independent directors taking effect on Jan 1, 2022.

As at June 30, 2019, 98 independent directors among the top 100 listed companies have served on the boards for at least nine years. 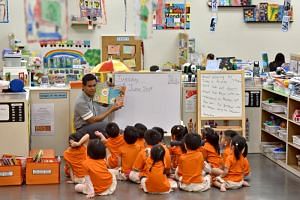 Who says these jobs are only for women?

Companies planning to appoint more women directors on their boards can look at a broader slate of male and female qualified board directors, and search beyond personal networks to enlarge the candidate pool, said CBD.

Co-chair, CBD and CEO, Singapore Exchange, Loh Boon Chye, commended the progress made by all three sectors in appointing women directors in the first half of 2019.

Co-chair, CBD and chairperson, National Volunteer and Philanthropy Centre, Mildred Tan, said: "CBD has intensified its efforts to engage in direct conversations with board decision-makers as it is timely for organisations to refresh their board and strengthen board composition, by looking for directors that bring a broader range of diversities and in-demand skills to take them into the future."