SINGAPORE (THE BUSINESS TIMES) - Polar Water Distributor, a Singapore-based food service distribution company, has gone for fully recyclable packaging over plastic bottles for its new drink in its drive to go green.

launched this week, the new product, Purewater, comes in paper-based Tetra Pak cartons with caps made from a non-food substance derived from sugar cane - making Polar Water the first company in Singapore to put its water in cartons made by the Swiss packaging giant.

The cartons are a change from PET bottles in which Polar Water has till now packaged its water.

Chew Thye Chuan, managing director of Polar Water Distributor, said: "We are very excited to provide consumers with Purewater in this renewable packaging."

According to Rena Chua, brand and marketing manager of Polar Water Distributor, this stems from the company's desire to be more sustainable.

The packaging is fully recyclable, with 72 per cent being renewable materials.

According to Terrynz Tan, an environment director at Tetra Pak, the paper-based packaging produces 17 per cent less of carbon footprint than fossil-based packaging. The bio-based caps are made from a non-food substance derived from sugar cane.

Despite the higher cost of Tetra Pak packaging compared with conventional PET bottles, Polar Water is prepared to further lower the margin of its carton packaged water.

Ms Chua said that the company is determined to move out of its comfort zone for the greater good, as "there is no planet B".

The new packaging is also consistent with a surge in the environmental consciousness of consumers. 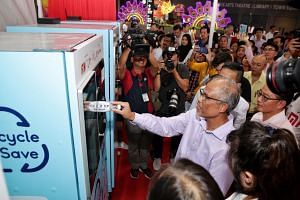 The zero-waste movement is on the march in Singapore

Trash or treasure: Can you tell what can and cannot be recycled?

Tetra Pak said that 43 per cent of consumers surveyed are now willing to pay more for environmental features, the highest percentage so far.

Besides Tetra Pak as a supplier, other stakeholders also play a role in the recycling process. Sembcorp, a public waste collector, is in charge of collecting refuse and sorting out recyclables.

SHA paper mill separates paper fibre from aluminium in the used beverage carton and turns fibre into recycled paper, while KPT Recycle transforms the aluminium into boards and roofing.

Mr Chew said the change to carton packaging is just the beginning of its sustainability efforts.

Polar Water is looking at adopting Tetra Pak packaging for other variants, such as flavoured and vitamin water, while exploring other packaging options, including aluminium cans.

"All of this is part of the Polar Water Distributor commitment to the environment and our customers," said Mr Chew.