Net profit for the three-month period plunged 74.9 per cent to $2.2 million, from $8.6 million a year ago, mainly due to higher net finance cost attributed to higher interest rates and additional loans to fund new investments. In addition, interest expenses in respect of the Perennial International Health and Medical Hub (PIHMH) in Chengdu previously capitalised were expensed off on completion of the project, the company said.

Earnings per share (EPS) for the quarter came in at 0.13 cent, down from 0.52 cent for the year-ago period.

Revenue rose 52.4 per cent to $27.6 million, from $18.1 million last year, mainly attributable to contributions from Capitol Singapore and PIHMH for the full three months of Q2 2019, as well as higher fee income from the group's management business. Parts of PIHMH began operating in June last year.

"With Capitol Singapore and PIHMH securing over 90 per cent committed occupancy to date, their contributions to the revenue line are expected to grow as more tenants commence operations over time," Perennial said in a press statement on Tuesday (Aug 6).

Finance costs was up 54.1 per cent to $31.8 million, while other income fell 98.8 per cent to $476,000 mainly due to the absence of fair value gain from the revaluation of PIHMH. This was partially offset by a higher share of results from associates, in particular the gain on divestment of Chinatown Point for the second quarter. 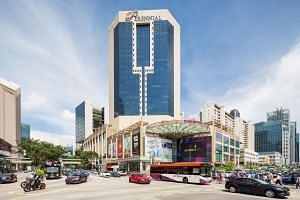 Nonetheless, revenue for the half-year period increased 58.7 per cent to $52.5 million.

Looking ahead, Perennial noted that the repositioning of retail in Capitol Singapore is on track and expected to complete by the third quarter this year.

It added that its assets such as Qingyang and Foshan in China have been performing well, while PIHMH's performance is expected to ramp up with the scheduled opening of Gleneagles Chengdu Hospital in Q3 2019.

"Concurrently, the group will continue to grow its footprint near High Speed Railway Stations by sourcing for more sites for injection into the healthcare joint venture."

"The fine-tuning of the operating model at PIHMH, our first integrated real estate and healthcare signature project in Chengdu, has also yielded positive results with all of the medical spaces fully taken up. In the next half year, we will continue to actively explore divestment opportunities to unlock value for our shareholders."

Perennial shares closed at 58 cents on Tuesday, down 1.7 per cent, or one cent.