SINGAPORE - Payments infrastructure firm Stripe said on Thursday (Sept 27) that it has selected Singapore as the site for its Asia-Pacific engineering hub.

The new facility will build and expand Stripe's global payments and treasury network for the company's growing user base in the region.

Stripe on Thursday also announced a new US$245 million (S$330 million) fund-raising round, which reportedly values the company at US$20 billion. The funding was led by Tiger Global Management, with DST Global and Sequoia Capital joining.

Stripe's head for South-east Asia and Hong Kong, Ms Piruze Sabuncu, said that the Singapore hub would include all of the core Stripe functions.

Mr Patrick Collison, chief and co-founder of Stripe, added that the company believes in the contingency of progress.

"Better global payments infrastructure will increase economic output, encourage entrepreneurship, and help upstarts compete with incumbents. By bringing Stripe into more markets and building out our capabilities for companies of all sizes, we hope to accelerate innovation around the world," he said. 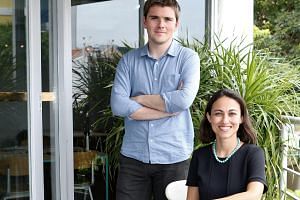 Online business payments of a different Stripe now in S'pore

Stripe will hire an engineering head for the Asia-Pacific, in addition to engineering managers, back-end and API (application programming interface) engineers, and full stack engineers. These will sit in the engineering hub in Singapore as part of a distributed global engineering team.

Founded in 2010, Stripe builds the "economic infrastructure for the Internet". Businesses of every size - from new start-ups to public companies such as Salesforce and Microsoft - use Stripe's software to accept online payments and run technically sophisticated financial operations in more than 130 countries.

In the past year, nearly 70 per cent of Singaporeans purchased something through Stripe's payments infrastructure, the company said. Its Singapore clients include Grab, Honestbee and CapitaLand.

Singapore was Stripe's first entry point into Asia in 2016, and this announcement comes on the company's second official anniversary in the country.