More than 1,000 companies from some 50 territories - including 65 of the top 100 global aerospace companies - have confirmed their participation in the biennial event.

Held at the Changi Exhibition Centre, leading Russian and Chinese manufacturers of commercial and military aircraft such as United Engine Corporation and Chengdu Holy Aviation will make their first appearance at the airshow.

Other debutantes will include Turkish Aerospace Company and Honda Aircraft Company.

Companies from major aviation markets such as the US, Germany, France, the UK and Israel are still expected to maintain significant representation.

Industry stalwarts such as Airbus, Boeing, Bombardier, Embraer, Rolls-Royce and ST Engineering will return for this year's airshow.

On display will be the latest products and services in such areas as cyber security, unmanned aviation systems, avionics, predictive maintenance, additive manufacturing and aircraft health monitoring.

To be held concurrently with the airshow are high-level conferences, forums and co-located events, which will facilitate dialogue and networking among leading industry players, government and military chiefs. 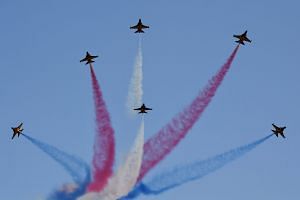 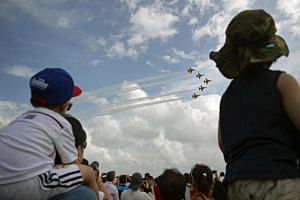 One of the main conferences of the Singapore Airshow is the Singapore Airshow Aviation Leadership Summit (SAALS), now in its sixth edition. The conference, themed "Reimagining Aviation's Future", will see about 300 top-level government and industry decision-makers from all over the world addressing challenges and opportunities arising from the continued demand for air travel, the rise of automated technology use in the industry, and new regulations.

CAAS director-general Kevin Shum said: "The SAALS will provide a timely platform to catalyse critical conversations among the movers and shakers in global aviation, bringing them together to reimagine aviation's future and unlock its full value."

Technology innovation will be the focus of both conferences. SATEC will provide a platform for aviation engineers and researchers to discuss recent developments in aerospace technology and engineering. ATLF will foster discussion among equipment manufacturers and aerospace maintenance companies with regard to new insights on research and development in the industry.

A start-up showcase, titled "What's Next @ Singapore Airshow", will premiere this year. It allows young companies to pitch their ideas to investors, accelerators and corporate partners.

It was also announced that President Halimah Yacob will launch the RSAF50 anniversary celebrations on Feb 7, 2018 at the airshow.