SINGAPORE (BLOOMBERG) - The Chinese trader fired by Mitsubishi Corp for allegedly losing US$320 million (S$441 million) in oil trading said he was acting on his managers' orders and there were no unauthorised transactions, according to his lawyer.

The losses at Mitsubishi's unit Petro-Diamond Singapore Pte resulted from "premature" settlement of the derivatives positions by the company, said Joseph Chen, the Singapore-based lawyer for the trader Wang Xingchen, also known as Jack Wang.

"Our client takes the position that he had not engaged in unauthorised trades in crude oil derivatives," Mr Chen said in a statement.

Japan's biggest trading house last Friday (Sept 20) said it expected Petro-Diamond to book the losses after discovering an unidentified trader "repeatedly" engaged in unauthorised crude derivative deals since January, disguising them as hedging transactions. The loss is equivalent to about 6 per cent of Mitsubishi's projected profit for the year.

The case is the latest in a long history of busts in the oil trading business, an often opaque and idiosyncratic world where cargoes of crude worth hundreds of millions of dollars quietly change hands. While these losses may require Mitsubishi to lower projected earnings for the year, they will also raise questions about internal controls at its trading unit, though the company has said they were sufficient.

The transactions were discovered in mid-August after a slump in oil prices triggered large derivatives losses at the company, Mitsubishi said in its statement. The employee was absent from work at the time, it said.

The trader manipulated data in Petro-Diamond's risk management system so that the transactions looked like they were related to real deals with customers, Mitsubishi said. After recognising that they could result in a loss for the company, it closed the derivatives positions. The trader was fired on Sept 18 and reported to police the following day, it said.

But Wang's lawyer told Bloomberg that his client followed internal reporting procedures and policy at all times and his trades were reviewed by Petro-Diamond's finance team. "Internal controls were in place" throughout the duration of the period in question, he said.

Wang was on vacation and then medical leave in August, according to his lawyer. He didn't abscond from work and doesn't want to identify his current location because of concerns for his safety, Chen said, adding that Wang has given "appropriate responses" to Petro-Diamond.

"Our understanding of the facts is how we described in our statement to the press, and we have every intention to give the authorities our complete cooperation," Mitsubishi and Petro-Diamond said in e-mailed statements in response to Bloomberg's inquiries.

The Singapore Police Force confirmed that a report has been filed and it's looking into the matter, declining to provide any other information.

The company said it subsequently conducted an internal review of its unit and concluded that it has sufficient controls in place. It added that it's tightened governance to ensure that any similar "improprieties can be detected at a much earlier stage."

There's little information that's publicly available about Wang yet Bloomberg News has pieced together his biography from several sources, including former colleagues and trading partners. They asked not to be identified because they don't want to speak publicly about the matter or they are not authorised to do so.

Born in 1983 in the north-eastern Chinese province of Liaoning, Wang studied for a bachelor's in mathematics with actuarial science from the University of Southampton, UK, and later a postgraduate diploma at the University of Oxford. 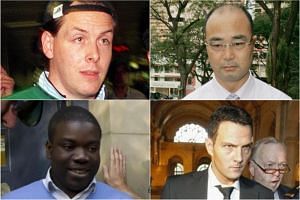 Traders in trouble: How does Mitsubishi's $441m loss stack up?

He joined the London office of Chinese oil trader Unipec in 2014. In November 2016, he moved to the State Oil Co of Azerbaijan (Socar) in London. He relocated to Singapore with Socar in August 2017. He left the following June and joined Petro-Diamond in November 2018.

Wang worked for Socar for a short period of time, but was dismissed along with the rest of his team "due to reduction of trading volumes", according to a spokesman for the company. Nobody replied to an e-mail inquiry sent to Unipec's Beijing headquarters.

Wang was hired by Petro-Diamond to help expand its business with Chinese counterparties, especially the independent Chinese refiners - known as teapots - that are an emerging force in that country's massive oil industry, the people said.

Petro-Diamond is Mitsubishi's overseas oil business, headquartered in Singapore. The unit trades crude as well as petroleum products including naphtha, gasoline and fuel oil. Petro-Diamond Singapore had revenue of US$6.7 billion in the year ending March 2018 and earnings before interest and taxes (EBIT) of US$18 million, according to the financial profile filed with the city's accounting regulator.

It represents a tiny corner of Mitsubishi, the biggest of Japan's so-called sogo shosha, the group of massive conglomerates involved in everything from iron ore to fish farms. Mitsubishi forecast full-year net income of 600 billion yen (S$7.7 billion) in August.

The oil trading community is still reeling from news of yet another bust. Only last year, China's Unipec took a $656 million hit from wrong-way bets on crude.

And while they're still a long way off the infamous US$1.2 billion blow-up at Metallgesellschaft AG in 1994, Petro-Diamond's losses will still go down as one of the more significant in the history of the oil business.