YOKOHAMA (AFP) - The CEO of Japanese car giant Nissan said on Friday (Nov 17) he will return part of his pay until next March following a damaging inspection scandal.

Nissan recalled some 1.2 million vehicles after admitting in October that staff without proper authorisation had conducted final inspections on some vehicles intended for the domestic market before they were shipped to dealers.

The firm suspended all production destined for the local market last month, but resumed production last week at all plants.

"I have been returning part of my monthly pay since October," Nissan president and chief executive Hiroto Saikawa told reporters on Friday.

Saikawa, who took over the top position from Carlos Ghosn earlier this year, said he would continue doing so until the end of March 2018.

"I'm doing this on a voluntary basis," he said, adding that he "understands" that other executives have been doing the same.

Details of the executives' salaries were not immediately available.

Nissan also submitted the results of a probe into the scandal to the transport ministry. 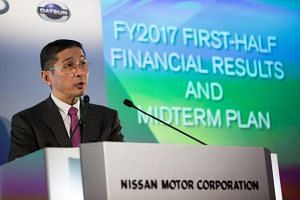 The report acknowledged that improper inspections became "the norm by the 1990s at many of the plants," adding that misconduct may have been carried out since 1979 at one plant.

The probe also showed that the plants were short of final inspection staff and employees were not sufficiently aware of the importance of the inspections.

As a preventive step, the firm has installed a special security gate through which staff qualified to carry out final inspections enter the plants.

It will also introduce a face-recognition system by March 2018.

The automaker produced 1.015 million vehicles in Japan in its last fiscal year to March, with about 400,000 units sold locally.

The scandal made a large dent in its car sales last month, which plummeted more than 55 per cent year-on-year.