LONDON (BLOOMBERG) - Nintendo will release Super Mario Run worldwide for Apple's iPhone and iPad on Dec 15 in US time zones, a highly anticipated launch that has a high bar for success after this summer's Pokemon Go phenomenon.

The game, the first mobile edition starring one of Nintendo's most iconic characters, will be free to download initially, and include an optional one-off payment of US$9.99 (S$14) to unlock all of the features. In addition to English and Japanese, Super Mario Run will be available in several other languages, Nintendo said in a statement on Tuesday (Nov 16).

The model of luring in players with a free version and then a one-time price is "a great strategy by Nintendo", said Mr Neil Campling, an analyst at Northern Trust Capital Markets. Many successful mobile games, such as Supercell Oy's Clash of Clans, which is also free but lets players buy "gems" with real-world currency, have seen annual spending of US$100 a year per gamer, he said.

"To set a low incentive and then a low total cost when engaged could set Nintendo on a differentiated path, which ultimately could be a game changer," Mr Campling said.

Super Mario Run's pricing structure means players can feel like they're getting a bargain, Mr Campling said, since it's about the same price as a one-month subscription to Netflix or Spotify and a fraction of the cost of a traditional game. 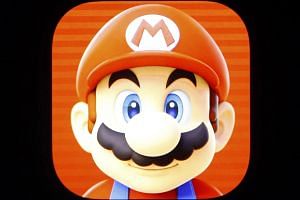 Super Mario on iPhone: Sonic, Pac-Man and other nostalgic games already on your smartphone

Nintendo has said any anticipated impact from the new game is already included in its earnings forecast for the current fiscal period, and that Super Mario Run will also be introduced for Android-based devices at a later date.

Super Mario Run marks the first time Nintendo's popular franchise is appearing on a smartphone. Mr Shigeru Miyamoto, one of the creators of the original Mario game, gave a short demonstration of the game at Apple's annual iPhone event in September.

The release follows this summer's wildly successful Pokemon Go, which was developed for iOS and Android by San Francisco-based Niantic with Nintendo's help and has been downloaded hundreds of millions of times, according to the game's creator.

It will also beat Nintendo's forthcoming home games console, the Switch, to market by several months. The Switch features a tablet-like display unit that can dock at home and connect with the TV, or be taken out and about with two detachable controllers for multiparty play. Nintendo president Tatsumi Kimishima said in April that "it will allow for a whole new way to experience hardware and software together".

Investors have cheered Nintendo's shift to mobile, sending shares in Tokyo up more than 48 per cent this year through Tuesday's close. Nintendo is also planning to release mobile titles for its Animal Crossing and Fire Emblem franchises by March.