Operating income slid about 10 per cent to 27.4 billion yen (S$345.3 million) in the three months ended June, the Kyoto-based company said in a statement on Tuesday, less than the 37.2 billion yen average of analyst projections compiled by Bloomberg. Net sales inched up to 172.1 billion yen. Nintendo left its full-year profit and revenue outlooks unchanged. Its stock dropped as much as 4.3 per cent, the most intraday in three months.

Nintendo in April put out earnings projections that fell far below analyst estimates despite a strong lineup of games for later this year and expectations for stronger hardware growth. The launch slate includes a new installment in the Zelda saga, Luigi's Mansion and two Pokemon games. The company is also releasing a cheaper version of its portable Switch gaming console and plans to enter the Chinese market. The anticipation has driven up Nintendo's shares 39 per cent this year.

"While the first quarter is pretty light, there is a lot to look forward to in the rest of the year," Jefferies Group senior analyst Atul Goyal said ahead of the earnings release. "Switch Lite and China should also add to the sales."

The Switch sports a stronger software lineup later this fiscal year. Pokemon Sword and Pokemon Shield are slated by the end of 2019. New entries in the Animal Crossing and Luigi's Mansion series are also scheduled for this year, as well as a remake of an older Zelda title.

President Shuntaro Furukawa in April confirmed that Nintendo is working with Tencent Holdings Ltd. to sell the Switch in China, but said there's no timeline for a launch. While demand for console gaming remains limited on the mainland, analysts say closer ties with the social media giant could lead to Nintendo releasing mobile titles in China, the world's biggest gaming market. 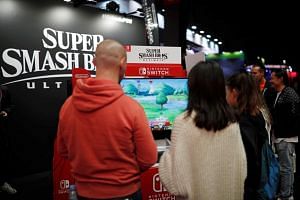 Smartphone game revenue rose 10 per cent in the quarter from a year ago to 10 billion yen. Nintendo released Dr. Mario World for mobile this month, but the most anticipated title is the upcoming Mario Kart Tour. Analysts have speculated that Mario Kart could become a billion-dollar grossing app if executed properly, but the company has delayed the title once and has yet to provide a single screenshot of the game.

"Nintendo has yet to announce the release date for Mario Kart Tour, which is due this summer, and that could serve as a share price catalyst," Goyal said.

The Switch Lite will retail for US$199.99, or US$100 less than the original device, in time for the all-important holiday shopping season. The new console will be released Sept. 20 and comes in yellow, gray and turquoise. The cheaper Switch is aimed at expanding the market so more people will buy the company's games.

"Switch Lite is a nice replacement for people who are still playing on the 3DS," Goyal said. "That installed base is about 75 million, and with the Lite model Nintendo can start appealing to them."