SINGAPORE - Fibre network operator NetLink Trust on Tuesday (May 7) said a service disruption that may have affected the fibre broadband services of some 2,000 end-users around the Marsiling area has been resolved.

The fibre service disruption was first reported at 4.21pm on Monday, and was resolved by 12.33am on Tuesday.

"NetLink apologises for the inconvenience caused, and will continue to work closely with all relevant parties to support end-users who may still be experiencing service difficulties," the company said in a press statement on Tuesday.

It added that the service disruption was due to a fibre cable cut by a third-party contractor.

According to NetLink Trust, there were 23 cable cuts from 2013 to 2018. These were caused by third-party contractors involved in the construction of new MRT lines, power cabling, water and sewage piping works and other development projects, the company said. 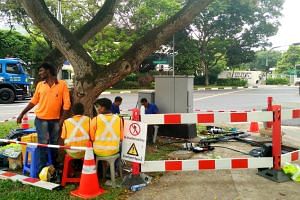 With effect from June 1, contractors carrying out earthworks in Singapore will have standardised rules for projects done near underground telecommunication cables, under a new framework to minimise service disruptions from cable cuts.

Among other things, they must get relevant service layout plans from telecom players and hire licensed cable detection workers to physically mark where the cables in the area are before works start. The network operators have to be officially notified at least a week in advance if the planned underground works are within 15m of any telecommunication cables.

UOB Kay Hian analysts Chong Lee Len and Chloe Tan have maintained a "buy" rating on the counter, with a target price of $0.92, representing an 11.5 per cent upside.

"We expect NetLink to meet our FY19 net profit forecast of $73 million, and DPU (distribution per unit) may exceed IPO (initial public offering) projections by 5 per cent at an annualised DPU of 4.88 cents. This translates to attractive net dividend yields of 5.8 per cent, and 6 per cent for FY19-20 respectively," the analysts wrote in a research note on Tuesday.

"We continue to like the company for defensive earnings (high barriers of entry), stable cash flow (90 per cent of earnings are recurring in nature) and potential beneficiary of TPG's mobile coverage plan," they added.