LOS ANGELES (BLOOMBERG) - Netflix is acquiring the rights to another show from Alibaba Group Holding's Youku video service, stepping up efforts to serve Chinese-speaking viewers around the world.

The US streaming giant purchased the rights to a romantic comedy, I Hear You. Netflix will stream 24 episodes of the show in 190 countries and regions starting May 15, Alibaba said in a statement. Financial terms weren't disclosed.

Netflix has been investing in Chinese-language programming for distribution outside China, where foreign streaming services are unable to operate without a local partner. Demand for that content is growing, and entertainment companies want a bigger slice of the market.

It is the second content deal the companies have struck, as Alibaba seeks to become the partner of choice for US companies trying to reach Chinese consumers.

"We see growing interest from international distributors," Brandy Zhang, chief editor of Youku's online series division, said in a statement. "We want to create even more quality content that resonates with viewers around the world."

Even though Netflix isn't available in China, the Los Gatos, California-based company has acquired programmes in Mandarin to appeal to the Chinese diaspora around the world.

More than 60 million Chinese people live outside the country, the government has said, with most of them residing in other Asian territories. 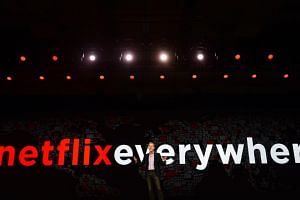 Netflix surges ahead of quarterly results report; Disney in focus

Alibaba previously sold Netflix the rights to the detective thriller Day and Night, which drew more than 4 billion views in China in its first four months on Youku. I Hear You, based on the popular Chinese novel of the same name, depicts the love that blossoms between an aloof violin maker and an aspiring actress, who find themselves in a reality-dating show.

Netflix also acquired rights to the Chinese sci-fi blockbuster The Wandering Earth, the highest-grossing movie in China this year. The company is planning to produce original series in Mandarin as well.

Asia has been the biggest hurdle for Netflix in its quest to sign up customers all over the world. The region is home to more than half of the world's population, but contributes a small percentage of the company's customer base. No Asian territory ranks among Netflix's top five markets, according to analysts' estimates.