SINGAPORE - DBS Group Research on Monday (Aug 19) noted that the Government's efforts to rejuvenate the Greater Southern Waterfront (GSW) area offers significant opportunities for developers, with Mapletree Commercial Trust (MCT) standing to gain as VivoCity, which is owned by the trust, is likely to remain the "bedrock of the GSW rejuvenation".

Other potential beneficiaries include Frasers Commercial Trust, which owns Alexandra Point and Alexandra Technopark in the vicinity; Keppel Corp; as well as Genting Singapore, from added revitalisation of the area, said DBS analysts Derek Tan and Ho Pei Hwa.

This comes after Prime Minister Lee Hsien Loong on Sunday shared plans on the development on the GSW in his National Day Rally speech.

Modern Singapore consists of "multiple layers and imprints of different eras", of which the GSW would add another layer, PM Lee said.

"There will be space for successive generations to fill with their hopes and dreams. Each new generation will leave their mark on our city, as their predecessors have done," he added.

Plans to redevelop the GSW were first unveiled in March, as part of the longer-term plan to rejuvenate the area over the next five to 10 years, starting from the relocation of the PSA City Terminal in Tanjong Pagar to Tuas from 2027 onwards.

Stretching from Gardens by the Bay East area to Pasir Panjang, the GSW covers more than 30km of Singapore's southern coastline and offers over 2,000ha of land for potential redevelopment, which is almost six times that of Marina Bay.

The report noted: "This offers significant opportunities for developers as the Government looks to reshape GSW as a new 'live, work and play' precinct starting with up to potentially 9,000 new residential development homes (public and private) at the site currently occupied by Keppel Club, on which there is a remaining two-year land lease."

The DBS analysts said: "VivoCity, the closest large retail mall located at the centre of the GSW masterplan, will be the bedrock of the rejuvenation of the GSW, in our view. We believe there will be greater benefits to the mall over time, with the expected increase in residential apartments, working population and new tourism elements added to the GSW," . 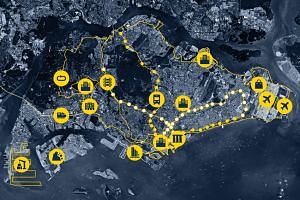 With the relocation of Pulau Brani Terminal, plans are also under way to turn it into an island of fun and recreation to complement the offerings at Sentosa, which itself is undergoing a rejuvenation.

"Plans for a Downtown South resort mirroring NTUC's Downtown East resort will over time bring more holidaygoers and families to the vicinity, driving visitations to both Sentosa and VivoCity," the analysts said.

The report added: "While the development will take time to take shape, the Government will also look to add more office space within the GSW to supplement the growth of the population catchment and bring more people to work within the GSW.

"This will inevitably be positive for MCT, which has office properties in the Alexandra precinct (Mapletree Business City Phase 1, PSA Building) and Harbourfront (Merrill Lynch Habourfront building), and will over time benefit from a wider pool of office tenants looking to relocate there, while the increased live-in population within the GSW will fuel the attractiveness of the properties to occupiers over time."