SINGAPORE - Keppel Corp Ltd (KCL), together with Singapore Press Holdings (SPH), will be making a pre-conditional voluntary general offer of $2.06 per share for the remaining M1 shares they do not own, valuing Singapore’s third-largest mobile operator at around $1.91 billion.

The offer will be made through joint venture company, Konnectivity Pte Ltd, which is majority owned by KCL, the companies announced on Thursday morning (Sept 27).

SPH, which owns 13.45 per cent of M1, will inject its entire 124.45 million M1 shares into Konnectivity. It is envisaged that the media and property group will invest up to $51.3 million in cash to partially fund the offer.

Depending on the level of acceptance, SPH’s eventual shareholding in Konnectivity will range from a minimum of 20 per cent to a maximum of 43.84 per cent. Its effective interest in M1 will range from 13.45 per cent and 16.13 per cent.

OCBC Investment Research analyst Joseph Ng said in an e-mail that the offer price for M1 presents value to shareholders, on the 24.8 per cent premium to the house’s fair-value estimate of $1.65 a share for the telco.

“We believe that it would have been challenging for M1’s share price to see a meaningful appreciation in the near term in the absence of the offer,” he said, citing the challenging telco industry landscape and the impending market entry of Australia’s TPG Telecom.

On the purchase rationale, SPH’s chief executive officer, Mr Ng Yat Chung said: “We are supporting KCL in this offer, as we see the potential for long-term value creation in M1 from the growth and business transformation initiatives to be undertaken post-close of the offer. The transaction is earnings accretive for SPH shareholders, and is part of SPH’s ongoing strategy to enhance value for its shareholders.”

Mr Ng added that “KCL has demonstrated strong commitment to lead M1 in its transformation plans, and we believe they are the right partner to take M1 further.

“We also see opportunities for SPH to leverage on M1’s mobile platform to offer on demand and ready digital content to better serve our customers. We look forward to working together to utilise our resources and expertise to best develop M1.”

Approval from the Info-communications Media Development Authority (IMDA) is a pre-condition to making the offer. Upon obtaining the IMDA’s approval, the offer will be formally made and will become unconditional when Konnectivity and its concert parties obtain more than 50 per cent of the issued share capital of M1 by the close of the offer. 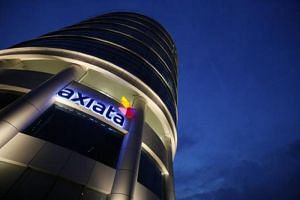 SPH, Keppel said to be mulling over buyout of $1.51b telco M1

Meanwhile, KCL, which owns 19.3 per cent of M1 through 80 per cent stake in Keppel Telecommunications and Transportation (Keppel T&T), said it would be making a general offer for Keppel T&T at $1.91 in cash, with plans to delist.

“The proposed scheme is consistent with Keppel Corporation’s strategy to simplify the Keppel group’s corporate structure, with a view to improving capital allocation and better aligning Keppel T&T’s interests with the rest of the Keppel group’s,” it said in a release.

KCL said that as Keppel T&T would remain a shareholder of M1, the scheme gives Keppel T&T’s minority shareholders an opportunity to realise their investment in Keppel T&T for cash at a compelling premium.

Mr Loh Chin Hua, Keppel Corp's CEO, said: “The scheme will similarly allow Keppel T&T’s minority shareholders, who may be concerned about the prospects of M1 in the face of heightened competition, to make a clean cash exit from Keppel T&T at a substantial premium.”

Ms Low Pei Han, investment analyst at OCBC Investment Research, called the privatisation “not much of a surprise” in the wake of both Keppel T&T’s declining share price and the bright prospects of its data centre and logistics business.

“This is probably a ‘low-hanging fruit’ for the group, and brings to mind Keppel Land’s privatisation in 2015 after Mr Loh was appointed CEO of Keppel Corp in 2014,” she said.

Mr Loh added that KCL’s offer for M1 is in line with KCL’s mission as a solutions provider for sustainable urbanisation.

He said: “Keppel Corporation has increasingly been transforming its traditional B-to-B business to include retail customers in gas, electricity and urban logistics. Incorporating M1’s capabilities and two million customers in a combined digital platform would provide opportunities for synergies and cross selling of services.”

Mr Loh also noted that KCL and SPH have been long-term shareholders of M1 since the 1990s.

“Notwithstanding the challenges currently facing the industry, we see considerable potential in M1 and have developed a transformation plan to sharpen M1’s competitiveness. Through majority control, we would, together with SPH, be better able to support M1’s management to drive changes and create greater value in the company.”

Fitch Solutions analyst Kenny Liew said in an e-mail that M1 will become more competitive and benefit from a clearer strategy, with fewer shareholders, adding that the deal will offer Keppel synergies in its goal of becoming an integrated communications player.

“M1’s access to last-mile infrastructure can be used to provide connectivity for properties and infrastructure under Keppel’s management, while Keppel T&T’s data centre services can support M1’s weak presence in the enterprise segment,” he said.

“In other business areas, for instance, Keppel can better integrate its electricity distribution business with M1’s home services, and there are also media distribution opportunities that SPH can provide and better realise through M1.”

However, Mr Loh said the transformation of M1 was a complex undertaking that would take several years. Hence, the offer allows M1 shareholders who are not prepared to wait and bear the related risks to realise their investment in M1 upfront.

Mr Liew, from Fitch Solutions, also noted that the buyout would lead to the exit of a significant foreign investor - Malaysian carrier Axiata Group, which is M1’s biggest single shareholder, with a 28.7 per cent stake.

“However, this may be positive for Axiata, which will be able to re-focus its funds to pursue expansion in other higher growth markets,” he said.

AmBank analyst Alex Goh held to a “buy” call on Axiata in a morning report, adding that the associate stake in M1 is not considered a strategic asset for the Malaysian telco.

“We expect a slight 2 per cent reduction to earnings per share for financial year 2019 from the equity sale, as the loss in earnings contributions will be greater than interest savings,” wrote Mr Goh.

“However, we are neutral on this development, as the sale proceeds of RM1.7 billion (S$560.3 million) will improve Axiata’s gearing levels.”