Indra Nooyi just wants a freshly squeezed orange juice for lunch and you can feel the disappointment of the waiter.

Over the next one hour, he tries several times to tempt her to eat.

Mushroom? He asks at the start of our meal.

She shakes her head.

She shakes it again.

Lamb? He tries when he comes round again.

"I'm a vegetarian," she tells him.

"Oh sorry," he says, crestfallen. "You are vegetarian."

She asks him for his name and he says he's Vikram, from New Delhi.

She puts Vikram out of his misery and says she will have a little piece of naan from the plate he's holding.

He is delighted, then concerned.

She laughs. "You leave it here. You're very persuasive."

Lunch with the former CEO and chairman of PepsiCo is at the Tiffin Room in the newly-refurbished Raffles Hotel.

Mrs Nooyi, 63, was in town last month for the Women's Forum Asia.

In the world of C-suiters, she's something of a legend and certainly an inspiration, not just to women and immigrants, but CEOs too.

She's one of the rarefied few who have attained the fame - and salary - to match that of rock stars, actors and professional athletes.

She reportedly earned US$31 million in 2017 alone. Her life has been exhaustively written about and she's one CEO people want to take selfies with.

Born in Chennai in India, she went to the United States on a scholarship and stayed on to work.

In 1994, she joined PepsiCo, the American multinational food, snack and beverage giant behind brands like Pepsi, Lay's potato chips and Gatorade.

She became its CEO in 2006, one of the few women heading a Fortune 500 company, and later chairman of the board as well.

She has consistently made it to lists like world's best CEOs and 100 most powerful women.

She is also known for her visionary leadership. She spearheaded PepsiCo's transition to a greener, more environmentally aware company, and stressed the shift towards healthier food to pre-empt the trend away from sugary drinks.

As CEO, she famously wrote more than 400 letters of thanks each year to the parents of her senior executives.

"She encouraged us 'to do well and to do good' and reminded us of our moral obligation to society."

Lunch is at 12.30pm. I'm early and luckily so because she arrives 10 minutes ahead of time.

Joining us for lunch is her Washington-based adviser Juleanna Glover, CEO of consultancy Ridgely Walsh.

At 1.75m tall and with a luxuriant head of hair worn in a short style, Mrs Nooyi cuts a striking figure. She's wearing a printed silk blouse over slim trousers and carries a dainty, silver mesh bag.

She has the self-assured air of someone who has known success for a long time and is comfortable in her own skin. But while her presence is commanding, her vibe is kindly and warm. She smiles a lot.

She's not eating because she had breakfast after a morning event. She urges Ms Glover and me to eat. "Go ahead, go get your meal, I'll watch all your things."

Retirement is suiting her well, she reports when we return with laden plates.

She lives in Greenwich, Connecticut, with her husband Raj K. Nooyi. They have two grown-up daughters, Preetha and Tara.

When not travelling, she plays tennis in the morning, then heads to a nearby office where the family business is conducted. She has a full-time assistant and several part-time staff and her husband manages the business.

She sits on boards like Amazon, teaches at West Point, is on the International Cricket Council, gives speeches around the world, helps the state of Connecticut attract businesses, reads a lot and is writing a book.

She is also learning ballroom dancing, which has always been on her bucket list.

It's all a long way from Chennai in Tamil Nadu, where she was born Indra Krishnamurthy in 1955.

She grew up in a big house with lots of uncles, aunts and cousins.

Education was a top priority in the family. Her paternal grandfather was a judge and maternal grandfather an advocate. Her father, who had a master's in mathematics, did internal audit in a bank. Her mother didn't have the means to go to college but "has a PhD in her head... she is brilliant".

She remembers the adults helping the children with homework and preparing problem sheets for them to practise. "It was pretty much the world of education."

Her two siblings, who live in the US now, are also very successful. Her older sister Chandrika Tandon is a businesswoman, philanthropist and Grammy-nominated musician. Her younger brother runs a hedge fund.

Mrs Nooyi got an undergraduate degree majoring in chemistry at Madras Christian College and an MBA at the Indian Institute of Management in Calcutta.

She shares a childhood tidbit when I ask if she has always had short hair. She used to have two pigtails but one day while doing a chemistry experiment, one of the pigtails dipped into some acid and her hair was singed.

"I used that as an excuse to cut it off," she laughs. "Best thing I did. Easy to manage."

She worked for a while, including at Johnson & Johnson. In 1978, she applied to and was accepted by Yale University's Graduate School of Management to do her second master's in public and private management.

"The US at that time was the beacon of hope, beacon of all the great things happening in the world, and to come to the US was extremely aspirational."

She reportedly worked as an overnight receptionist to make ends meet while at Yale.

She met Mr Nooyi while working a summer job in Chicago in 1979. He was a year older, from the west coast of India and had furthered his studies in the US. Their family backgrounds were similar.

Her much adored father died of cancer around that time. "He came to my wedding and it was wonderful that he was alive at my wedding. Year after, he passed away."

The challenge of a CEO is to look around the bend and say where are the problems coming, how do you retool the company for the problems that could come, because once the problems hit you, it's too late to change.

She pauses then adds: "I miss him even today."

She stayed on in the US, joined the Boston Consulting Group, and later, Motorola and Asea Brown Boveri in strategy roles before moving to PepsiCo.

She did corporate strategy, became part of senior management and was involved in the company's transformation.

PepisCo had exited non-core business in the late 1990s to focus on its snack food and beverage lines. Those were exciting days with acquisitions like orange juice company Tropicana and a merger with Quaker Oats.

On the home front, her mother moved to the US to help look after her daughters. She is very close to her mum, who lives with her brother in New York.

Several times during the interview, she speaks about what a good man her husband is.

Mr Nooyi's background is in engineering and he was president of a custom e-solutions company. He now works with her in the family business.

What was always at the back of her mind was how she was an immigrant in the US.

"I wanted to work hard because as an immigrant, you always have an immigrant's fear," she says.

"I just wanted to work hard and do well because I wanted to make my family proud. And one thing led to another."

She adds: "It was never about how am I going to get the next two jobs. It was how do I keep the job I have and do it well."

At what point did she realise she was really successful? When she started getting those huge salaries?

"Sumiko," she laughs. "Anytime I got a salary, I thought it was huge, trust me. Because remember I came from nothing. So anytime I got a promotion and a big raise, I say: 'Wow, I got lots of money'... We were just grateful for what we have, always, always."

There must have been career setbacks, I say.

"I didn't have any expectations of it going anywhere. I just felt so long as I was doing a great job, everything would take care of itself."

She learnt along the way and had great mentors "who pulled me up".

She says there weren't many senior women in the workplace then. "They were all men and they were wonderfully supportive."

How did she divide her roles as CEO? 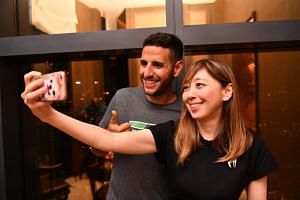 She especially relished the role of CEO as "supporter, coach, mentor". "I'll teach them all the things that I learnt to get to where I was."

She speaks highly of her successor, Mr Ramon Laguarta, a long-time PepsiCo executive.

When I ask if she was disappointed she wasn't succeeded by a woman, she says Mr Laguarta was the best person for the job.

She believes that for a company to be successful, it must pick the best and the brightest men and women to work for it. The top job should go to the best person, regardless of gender.

But it is also important that companies have an environment where men and women have equal chances to succeed.

"We want to create a level playing field that both can be successful, and that's really what I tried to do at PepsiCo," she says. "It's good for the country, it's good for companies and it's good for women."

To get more women CEOs, the pipeline needs to be built. "You can't suddenly get a CEO, you have to build a CEO."

Ms Glover signals that we need to wrap up soon. I slip in the question I need to ask Mrs Nooyi.

Do you drink Coke?

"What's that?" she shoots back, laughing.

I suppose that's the reply you always give, I remark.

No, she says. "I always say the beverage industry is blessed with incredible, iconic brands, great tasting products. Theirs is a product, ours is a product, slightly different taste, and I happen to like our taste."

We have about enough time for dessert. Vikram returns with a sample plate and is pleased to see her help herself to laddu, a floury sweet.

Encouraged, he asks: "Fruit too?"

She smiles and declines.

"The wonderful thing is, now I can do only what I want to do, not what I have to do. It's a great place to be in," she says before she leaves.

Seeing her tall figure striding off, I think to myself that having the smarts, then working super hard at whatever job she was given, really paid off for her.