SINGAPORE - Another potential investor has deepened talks with Hyflux as the insolvent water treatment firm searches for fresh funds to stave off liquidation.

Oyster Bay Fund, a global multi-strategy investment fund, is mulling over an investment and has given Hyflux a non-binding letter of intent, the firm said on Friday (May 10). ST understands that the fund is based in Bermuda.

As an indication of its good faith and intent, the fund is prepared to buy preference and ordinary shares in HyfluxShop Holdings from the company for up to S$26 million, Hyflux said. If a definitive agreement is signed, this sum is expected to be used as working capital.

Hyflux said it envisions an investment of up to S$500 million in the group by the fund, subject to regulatory clearance, due diligence and the execution of a definitive agreement.

HyfluxShop is the consumer water business in which Hyflux owns a 30 per cent stake. HyfluxShop used to be wholly owned by Hyflux until February last year.

In February last year - months before Hyflux filed for bankruptcy protection in May - Hyflux distributed 70 per cent of the shares of HyfluxShop to Hyflux shareholders via a dividend in specie, resulting in Ms Olivia Lum, Hyflux's controlling shareholder, owning 23.8 per cent of HyfluxShop. She then made a general offer to buy up the remaining HyfluxShop shares from the rest of the minority shareholders.

At the time, HyfluxShop was valued at S$20 million, based on the price per share she offered to pay. Hyflux also agreed to buy S$20 million HyfluxShop preference shares with a 6 per cent annual dividend. 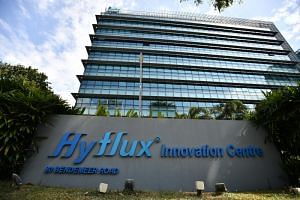 Hyflux fends off bank efforts to start an action for judicial management, debt moratorium extended to May 29

Hyflux debt moratorium extended to May 24

Hyflux said on Friday: "The letter of intent (from Oyster Bay Fund) is stated to automatically terminate if a judicial manager or liquidator is appointed over the company."

The new development comes two weeks after Hyflux received a non-binding letter of intent from Emirati utilities group Utico. Discussions with Utico are based on a possible injection of S$400 million to be used for equity and working capital purposes and possible urgent interim funding.

During a hearing in the Singapore High Court on Tuesday, Hyflux was asked to give more clarity on its planned timeline to get a restructuring complete.

Lawyer Smitha Menon, who represents Hyflux, said she could not provide more clarity yet. "The investor (Utico) is doing due diligence, it's a moving timeline. We are dealing with information requests as well as negotiating a possible structure," she said.

Hyflux also said on Friday that it is continuing to engage with other parties who have expressed an interest to invest in the group.

Priority will be given to parties that are willing and able to provide interim funding and reach a binding agreement with the company within the shortest possible time, it added.