SINGAPORE - Holders of Hyflux perpetual securities and preference shares, who are owed $900 million, will receive a total of $27 million in cash and a 10.26 per cent of the company under a long-awaited restructuring plan filed by the embattled water treatment firm with the High Court and posted on the Singapore Exchange website early on Saturday morning (Feb 16).

Hyflux's total debt amounts to almost $3 billion. While about $900 million is owed to 34,000 holders of its perpetual securities and preference shares, its unsecured bank creditors are owed $717 million, and unsecured contingent creditors and medium-term noteholders have claims of $915 million and $271 million respectively.

Under the proposed plan, unsecured creditors who are not holders of perpetual securities and preference shares will receive 27 per cent of shares post-reorganisation, and a total cash distribution of $232 million.

In her affidavit in which she laid out the restructuring plan, Hyflux chief executive Olivia Lum said that she and current board members who are also perpetual securities and preference shares intend to contribute the distributions that they would have received  as well as ordinary shares in the company that they hold back into the pool of assets for redistribution.

These will be distributed solely among the holders of the perpetual securities and preference shares, she added. Hyflux also reiterated that in the event no rescue plan is approved and the company is liquidated, this group of unsecured creditors stand to lose everything.

As for the ordinary shareholders of Hyflux, they will receive 2.74 per cent of shares in total under the restructuring plan.

The bulk of Hyflux's share capital, post-reorganisation - 60 per cent - will go to SM Investments, a consortium of Indonesia's Salim Group and energy giant Medco Group, which has agreed to invest $530 million in the company. 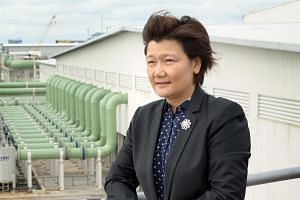 For the trade creditors of Hyflux's subsidiaries, $13 million will be set aside to satisfy all the claims against Hydrochem, Hyflux Engineering and Hyflux Membrane Manufacturing.

"This amount has been allocated between the three entities based on an evaluation of the liquidation analysis to allow recovery, at the first payout date, of at least as much as the high case in the liquidation scenario," she added in the affidavit.

The proposed scheme, said Ms Lum, aims to "revitalise its businesses" and allow the restructuring to take place in an orderly manner, among other outcomes.

The company and the three subsidiaries have filed applications to the High Court to convene a scheme meeting with all creditors to vote on a compromise or arrangement. This will be heard on Feb 21 at 2:30pm.