SINGAPORE - Hyflux and three of its subsidiaries have applied to the court for a further extension of the debt moratorium, the troubled water treatment firm said in a bourse filing on Wednesday morning (July 31).

The applications for the extension will be heard at the next court hearing on Friday at 2.30pm, when the court will also hear an update on Hyflux's restructuring process.

In May, Justice Aedit Abdullah extended the moratorium by two months to Aug 2, less than the four-month extension till the end of September that Hyflux had sought.

Hyflux also updated on Wednesday that it continues to be in discussions with potential strategic investors and stakeholders, with a view to entering into a binding agreement for an investment in the group.

The last announcement on these potential investments was made on July 11 with Utico FZC. In a joint statement, Hyflux and the United Arab Emirates-based utilities company said they were in talks for Utico to possibly take an 88 per cent stake in Hyflux through a $400 million commitment comprising $300 million in equity injection and $100 million in a shareholder loan.

In addition, Utico intends to offer the cash equivalent of a 4 per cent stake in the enlarged Utico group plus additional cash to Hyflux's perpetual securities and preference shareholders.

On July 16, Utico said it valued this potential rescue deal at up to $535 million - higher than an earlier failed $530 million deal that SM Investments had proposed. This will include Utico's $400 million commitment to ensure Hyflux remains a going concern and also to grow the business. 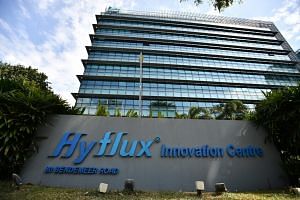 Hyflux also said in May and June that it had received separate non-binding letters of intent for investments in the group by a Chinese power service provider as well as Mauritius-registered Oyster Bay Fund.

Hyflux has prioritised discussions with investors who are willing to keep the group intact, as opposed to those who prefer to "cherry-pick" parts of its business, WongPartnership lawyer Manoj Sandrasegara, who represents Hyflux, told the court on May 29.

Hyflux said on Wednesday that it will make further announcements as and when there are further material developments on the moratorium and discussions with potential investors.