SINGAPORE (BLOOMBERG) - Zilingo Pte's path to becoming a fashion platform with a valuation approaching US$1 billion began in December 2014 when Ankiti Bose, then an analyst at Sequoia India, chatted with a neighbor at a house party in the Indian tech capital Bengaluru.

Bose, then 23, and Dhruv Kapoor, a 24-year-old software engineer at gaming studio Kiwi Inc, quickly realized they had complementary skills and similar ambitions to build their own start-up. Four months later they had quit their jobs, and each had put in their US$30,000 in savings to found Zilingo, an online platform that allows small merchants in South-east Asia to build scale.

On Tuesday, the Singapore-based company said it raised US$226 million from investors including Sequoia Capital and Temasek Holdings. The latest financing valued Zilingo at US$970 million, according to people familiar with the matter, who asked not to be named because the information is private. That makes 27-year-old Bose among the youngest female chief executives to lead a start-up of the size in Asia.

Female founders remain rare in the global start-up world. Of the 239 venture capital-backed start-ups around the world worth at least US$1 billion, only 23 have a female founder, according to data from Pitchbook in May last year.

"We were a bunch of twenty-somethings with nothing except this dream and we decided to chase it," Bose said.

Bose is now part of a group of founders in South-east Asia who are capitalizing on the region's rapid adoption of smartphones and rising incomes. Online shopping in the region reached US$23 billion in 2018, according to a report by Google and Temasek. It's expected to exceed US$100 billion by 2025.

Zilingo posted revenue of $1.8 million in the year ended on March 31, 2017, up from about $434,000 since its inception though March 2016, according to the company's most recent filing with Singapore regulators. Revenue grew 12 times in the year ended March 2018 and fourfold in the April to January period, according to the company. Kapoor holds the title of chief technology officer. 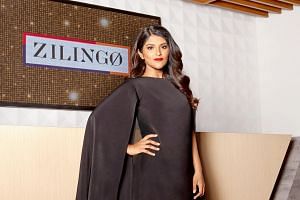 Fashion start-up Zilingo raises US$226m from Temasek, EDBI and others

The company started off by helping small merchants sell to consumers, and has since expanded into new areas. As the founders dealt with thousands of small sellers, they realized that many lacked access to technology, capital and economies of scale.

So they expanded, developing software and other tools to allow vendors to access factories from Bangladesh to Vietnam and also help with cross-border shipping and inventory management. Since 2018, Zilingo has also worked with financial technology firms to provide working capital to small sellers so they can buy raw materials to produce goods.

Listings are provided for free with the company charging a commission of between 10 per cent and 20 per cent on orders.

Some of Bose's early inspiration came from a visit to Bangkok's popular Chatuchak market, which features more than 15,000 booths selling goods from across Thailand. She realized the sellers didn't have sufficient opportunities to expand.

Since setting up its first presence in Thailand and Cambodia in 2015, the company has grown to have offices in eight countries with 400 employees. It operates fashion e-commerce sites in Indonesia, Thailand and the Philippines and is preparing to launch in Australia soon.

While Bose has figured out a way to differentiate Zilingo, her challenge is to now manage the company's "hyper-growth" by recruiting the right leadership team and maintaining the right culture, said Shailendra Singh, managing director of Sequoia Capital (India) Singapore.

Raised in India, Bose's father's job as an engineer at a state-owned oil company caused the family to constantly move when she was a child, exposing her to different cultures and languages within the country. Her mother gave up her career as a university lecturer and devoted her time teaching her only child at home. Bose excelled as a student, studied math and economics, and eventually landed a coveted job with consultancy McKinsey & Co. in India, where she covered India's burgeoning technology, media and telecom sector.

She took the calculated plunge to set up Zilingo, she says, after gaining expertise evaluating major startups in Southeast Asia at Sequoia India's venture capital business. As she did that, she saw a huge opportunity to build a business herself.

"I kept raising my hand and said, 'Teach me everything,'" Bose said of her pre-start-up years. "I busted my ass, working 18 hours a day because it was so much fun."