SINGAPORE (BLOOMBERG) - The billionaire behind Haidilao International Holding, the world's biggest chain of hotpot restaurants, has opened a family office in Singapore to help manage her wealth.

Shu Ping was appointed the sole shareholder and director of Sunrise Capital Management in July, according to filings lodged with Singapore's national regulator of business entities. Shu co-founded Hong Kong-listed Haidilao with her husband Zhang Yong and two others.

Haidilao is best known for its string of Chinese spicy soup restaurants, some of which also offer free massages and manicures to waiting customers. What started as a humble family business in 1994 is now a food-service giant with almost 600 outlets spanning Beijing to New York.

Shu is one of Singapore's richest people with a net worth of around US$7.7 billion (S$10.7 billion), according to the Bloomberg Billionaires Index. Her husband is also worth US$7.7 billion. While it's unclear if Sunrise Capital will manage the couple's combined wealth, a December filing showed Shu has full authority to issue shares in the entity. 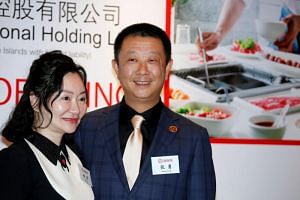 Family offices are businesses created to run the finances (and sometimes the lives) of the world's super rich, providing a level of discretion and personalized services beyond those offered by private banks.

Selecting Singapore as a base for Sunrise Capital is a major win for the city-state. Singapore's government has been offering tax breaks and other incentives through agencies such as the Economic Development Board to attract the world's billionaires.

In September, Bloomberg reported that James Dyson's family office Weybourne Group had established itself on the island.

How much of Shu's wealth Sunrise will manage isn't clear, but both she and her husband have substantial ties to Singapore. They're naturalized citizens and several years ago purchased a $27 million home near the Botanic Gardens.

Haidilao gets about 91 per cent of its revenue from mainland China. It shut its restaurants there in late January because of the Covid-19 outbreak and even now, only partial delivery is available online.

China Citic Bank International and aiBank said last month they would extend a 2.1 billion yuan (S$417 million) line of credit to Haidilao to help it ride out the impact from the virus, according to a statement on aiBank's WeChat account.

Despite that, its shares have held up reasonably well, up 3.7 per cent this year versus a 7 per cent decline in Hong Kong's benchmark Hang Seng Index.