SINGAPORE - A group of 18 hotels signed agreements with a union on Wednesday (Oct 23) to work together on redesigning jobs and training workers in their hotels.

The hotels, which employ more than 6,000 workers in all, will form company training committees with the Food, Drinks and Allied Workers Union (FDAWU), and these committees will be part of the new FDAWU-Hotel Future of Work Partnership Network.

The union's general secretary Tan Hock Soon said the network will allow know-how and initiatives, like redesigning jobs for workers to harness technology for their work, to be shared across partner hotels quickly, affordably and more sustainably.

"With synergised efforts, we can look to re-energise hotels' value proposition as employers, and use gains from (the network's projects) to improve wage, welfare and work prospect outcomes for every hotel worker," he said.

National Trades Union Congress secretary-general Ng Chee Meng said at the signing event at Copthorne King's Hotel that by getting unions involved in training, "we hope to be able to partner the companies to nudge workers forward as well".

The hotels involved in the initiative include the Shangri-La, Four Seasons and Conrad Centennial Singapore.

Two other hotels - Ascott and Royal Plaza on Scotts - which had formed company training committees with the union earlier this year, will also be part of the network, bringing the total to 20 hotels.

The network will initially form a workgroup among the hotels to redesign security and engineering jobs.

The project will begin in January and be backed by the Institute for Adult Learning. 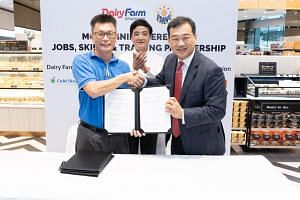 Dairy Farm Singapore and union to collaborate on job transformation and training for over 5,000 workers

A skills recognition pathway for the professionals in engineering, facilities and security teams will also be created, using data points gathered from the job redesign project. Work on it will begin next month.

With such projects, the network will ensure current and future workplace trends are captured and translated into clear and updated pathways that allow management to identify knowledge and skills gaps, and, in turn, produce targeted programmes for staff.

The network will also work with the NTUC's Learning Hub on a workforce redesign programme to train company and union representatives in strategic workforce planning as well as job analysis, design and redesign. The first class will begin at the end of next month.

Mr Kung Teong Wah, general manager of Copthorne King's Hotel, which is in the new network, said he hopes to send his staff for courses that are more tailored to the industry and the worker's competency level.

He suggested, for instance, that hotels could send their mature workers to attend an entry-level course together.

"With the NTUC involved, the support is enormous, compared to me doing it alone, so things will get a lot better, faster," he added.