SINGAPORE - Local grocery start-up Honestbee has been granted a 30-day extension to its reprieve from creditors by the High Court on Tuesday (Aug 27), as the company looks to restructure its debt.

Honestbee chief executive Ong Lay Ann said that the firm was granted a 30-day extension until Oct 4 to furnish details for its moratorium application.

Several of its creditors have filed objections against the moratorium, which was the reason why the six-month debt moratorium was not granted, Mr Ong said. The firm was granted an automatic 30-day court protection when it filed for a debt moratorium earlier this month, Mr Ong noted.

Honestbee, which had applied for a six-month moratorium on Aug 1, owes its 20 largest unsecured financial and trade creditors in excess of $277 million, according to an affidavit filed on Aug 22 correcting the list in its earlier application.

The affidavit also noted that the firm has 12 court proceedings pending as at Aug 22.

A further 13 letters of demand which were "either inadvertently omitted or received" were also stated in the affidavit, adding to the 38 letters of demand the firm had received and set out in its earlier court application.

"For us to restructure the company, given the number of creditors and complexity of the case, 30 days is insufficient," Mr Ong said.

A minimum of four to six months would be required for Honestbee to manage its creditors and propose a viable scheme, he noted.

According to court documents, some of the firm's creditors, including a Mr Benjamin Lim Jia-Rong and LHN Space Resources, had filed affidavits to oppose Honestbee's application for a debt moratorium earlier this month.

LHN Space Resources is the landlord of Honestbee's Habitat premises at 34 Boon Leat Terrace, the leases for which are outstanding. 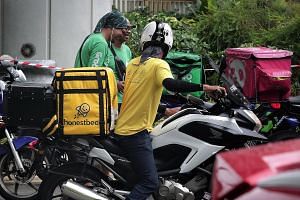 Why Honestbee spiralled so quickly into financial crisis

According to the affidavit filed by Mr Ong on behalf of Honestbee on Aug 22, the firm has paid LHN Space Resources close to $115,000 of its original debt of more than $228,000 and intends to complete the payment by the end of the month.

LHN is also holding a security deposit of close to $490,000, the filings noted.

Earlier this month, it was reported that Honestbee's three largest creditors - Singapore-registered special purpose vehicle A Honestbee, early investor Formation Group and Honestbee's chairman Brian Koo - which account for 77.2 per cent of the firm's debt, indicated support for the moratorium.

According to the affidavit filed on Aug 22, eight other creditors accounting for 1.9 per cent of the company's debt, including Mitsubishi Corporation, also indicated support for the moratorium.

In its application, the struggling firm said it had received an expression of interest from one of its early investors, Formation Group, for an investment of up to US$25 million ($34.8 million).

Between Aug 5 and Aug 22, Mr Koo and Formation Group have injected US$1 million each into Honestbee for working capital.

According to court filings, the monies have been used to pay the salaries of active employees, rental, operating expenses and critical technological services.

A total of $850,000 was spent on employees' July salaries, and an undisclosed sum has been allocated for August pay.

Mr Ong, who was appointed on July 15, had told The Straits Times in an earlier interview that the firm prioritised the payment of current employees' salaries, but he and the senior management are not being paid at present.

A hearing has been set on Sept 30 for Honestbee to present further details of its proposed restructuring process.