SINGAPORE - Grocery and delivery start-up Honestbee has announced the appointment of its new chief executive, close to three months after former CEO and co-founder Joel Sng stepped down from the company.

In a statement on Monday (July 29), Honestbee said that Mr Ong Lay Ann's appointment was effective as of July 15.

Mr Ong has close to two decades of leadership experience in IT, commodities, real estate and infrastructure, Honestbee said.

He currently serves as a director for Australia-listed Weststar Industrial, and ISDN Investments, the investment and trading arm of mainboard-listed precision and motion control engineering firm ISDN Holdings.

"It is a huge privilege to lead Honestbee - a true-blue local start-up full of potential and brilliant talent," Mr Ong said.

"While the company has faced recent setbacks, I believe that there are still immense opportunities to be met." 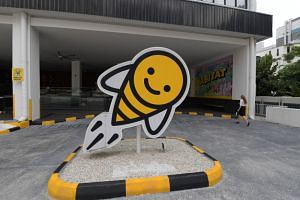 The company's assets were acquired via Precast Australia, which has been listed on the Australian Stock Exchange via a reverse takeover.

"Lay Ann is an exceptional business leader that has been brought on board due to his tremendous track record in turning ailing businesses around," said Mr Koo, who was named board chairman when Mr Sng left Honestbee.

"We have confidence that Lay Ann has what it takes to restructure the business, build consumer confidence and employee morale, repair relationships and bring the brand to greater heights."

In the statement, Honestbee added that co-founder and chief technology officer Jonathan Low had resigned from the company on July 11.

Mr Low co-founded the company in July 2015 and was key to the company's growth over the last four years, leading the engineering team in Singapore and Taiwan and supporting the development of the firm's products over the years, Honestbee said.

Mr Low is the last of Honestbee's co-founders to leave the firm.

In May, Mr Sng sent an e-mail to Honestbee employees announcing his intention to resign, saying that the firm needed a reset and to place greater focus on its customers, partners and contractors.

A third partner, Mr Isaac Tay, left the company in 2018, according to his LinkedIn profile.

"It is my privilege to have worked with some of the best talent during my time here," Mr Low said, adding that his decision to leave the start-up was made before Mr Ong was appointed as the new CEO.

He added that he has full confidence that Mr Ong will help Honestbee's development and recovery from its recent setbacks.

In April, the home-grown company said that it was suspending some of its operations in Asia and cutting its global headcount by 10 per cent as part of its strategic review.

On May 15, Honestbee announced that it was ceasing its food delivery service in Singapore.