SINGAPORE - Grab will launch a beta trial of GrabExpress, its on-demand door-to-door delivery and courier service, in Singapore on Tuesday (Oct 23), to serve the growing demand for instant delivery of parcels.

The GrabExpress service will first be piloted among selected Grab users, and is limited to delivery from the eastern part of Singapore to the eastern fringe of the Central Business District, Grab said in a media release on Monday. Areas covered include Changi, Tampines, Paya Lebar, Bedok, Marine Parade, Geylang, Kallang, Bendemeer, Jalan Besar, Bugis and Esplanade.

Users can access the GrabExpress service via a widget within the Grab app. To make a booking, the sender simply has to enter the pick-up location and recipient's details, and make payment through GrabPay. A delivery-partner will be assigned and complete the delivery within two hours of booking.

Prices will start from $6 a delivery, with an additional $1 per 1km delivery distance. GrabExpress beta prices will not be subject to dynamic pricing or additional surcharges such as Electronic Road Pricing.

GrabExpress users can place up to 10 deliveries at a single time. Grab said this is especially useful for businesses and small and medium-sized enterprises that might be dealing with multiple customer orders.

GrabExpress can support parcels and documents that are smaller than 32cm x 25cm x 12 cm in size, and no more than 5kg in weight. All GrabExpress deliveries are covered by insurance and can be tracked in real-time via the Grab app.

Singapore is the fifth country within Grab's South-east Asia network of eight markets to land GrabExpress - after Indonesia, the Philippines, Thailand and Vietnam. 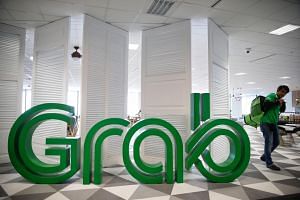 Grab to pay $6.42m anti-competition fine as it prepares for Go-Jek arrival

Grab said: "The beta version of this service, which makes use of GrabFood's motorcycle fleet, would also provide greater income opportunities for the delivery-partners, especially during off-peak hours."

Grab hopes to eventually extend GrabExpress beyond its GrabFood motorcycle fleet to its private-hire car drivers (under GrabCar) and taxi drivers (under GrabTaxi). This is currently not allowed in Singapore but Grab said it "has been in constant discussions" with the Land Transport Authority.