SHANGHAI (BLOOMBERG) - For BMW, Tesla and other global automakers whose future is ever-more dependent on China's burgeoning market, any gains from lower import tariffs this week will likely be short-lived - thanks to US President Donald Trump's trade war.

After decades of pleading for easier access to the world's biggest car market, manufacturers finally saw duties on overseas imports almost halved to 15 per cent on Sunday (July 1). But the reprieve for producers of those models - if they are built in the US - is set to end in five days, when a retaliatory 25 per cent levy makes them more expensive.

Mr Trump's tit-for-tat trade squabble with China threatens to undo years of lobbying by carmakers and drag Europe's leading luxury brands into the fray because of decisions that were made when global manufacturing and exporting were buzzwords. Now, the uncertain implications of a tariff whiplash are unnerving dealers and consumers in a country where a record 24 million vehicles were sold last year.

"It is a nightmare to have the 25 per cent additional duty," said Wang Rongzhen, deputy general manager and an investor in Yan'an Jinchi Feike Auto Sales and Service Co. The Yan'an, Shaanxi-based dealership imports models such as Fiat Chrysler Automobiles NV's Jeep from the US.

"Most of the clients are waiting," Ms Liu said. "After the trade war issue, many imported vehicles like Mercedes-Benz or BMW, especially the BMW X4, X5 and X6 manufactured in US are being impacted. We are advertising that clients can buy cars at promised prices before July 6, but there are no guarantees afterward."

Unless President Trump backs down, on July 6 the US will impose tariffs on US$34 billion of Chinese imports, many of them parts used in products such as marine engines and power turbines. China will impose countervailing levies the same day -- including on US-manufactured cars. The auto tariffs will wipe out the July 1 reduction to 15 per cent from 25 per cent on all foreign car imports.

"US carmakers may need to brace for seeing their market share encroached as consumers increasingly favor domestic brands," said Liu Yuanchun, a professor at the National Academy of Development and Strategy at Beijing-based Renmin University of China.

The additional levies could trigger even more retaliatory measures. Trump last month instructed trade officials to identify US$200 billion in Chinese imports for additional tariffs of 10 per cent, and said the US would impose duties on another US$200 billion if Beijing retaliates. China vowed to hit back.

Amid the rising tensions, carmakers across the world are urging Trump's administration not to impose tariffs of its own on overseas car imports. South Korea's Hyundai Motor Co said duties would be "devastating." General Motors Co, which imports vehicles from Mexico to sell in the US, warned it might shrink US operations and cut jobs.

Of China's US$51 billion of vehicle imports in 2017, about US$13.5 billion came from North America, including sales of models made there by non-US manufacturers like BMW. China imported 280,208 vehicles, or 10 per cent of total imported cars, from the US last year, according to China's Passenger Car Association. 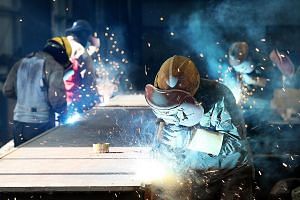 Q3 off to volatile start as trade spat escalates 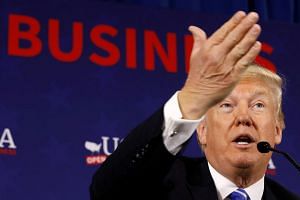 Trump proposes US$100 billion of additional tariffs on Chinese goods

US workers fear steel tariffs could be nail in the coffin

Some US automakers that preemptively lowered prices in China are now cornered. A day after China announced cutting auto-import tariffs in May, Tesla lowered prices by about 6 per cent. That means the Model S sedan would cost between 710,000 yuan (S$146,048) and 1.23 million yuan.

Andy Wu, who works at a trading company in Beijing, has been looking at buying a Tesla but now has second thoughts even after the recent discounts.

"I want to choose some accessories and customize some parts, and they don't really have a vehicle the way I wanted that's already cleared customs before the new tariff gets in," said the 33-year-old. "I'm going to wait for a while and see where this is going."

Mr Wang, the manager at Jinchi Feike, said carmakers may be reluctant to reverse the price cuts after July 6 because they will find it more difficult to compete with European brands.

Even US automakers that assemble vehicles in China, such as GM and Ford Motor Co, could be hurt by the July 6 tariff out of concern their cars will become more expensive to repair, he said.

In an emailed statement, Ford said it's maintaining price cuts on imported Ford and Lincoln models announced in May. "It's essential that governments work together to lower, not raise, barriers to trade."

GM said it "has the philosophy to build where we sell. Virtually all the vehicles we sell in China are built in China, and virtually all parts are sourced locally."

Among foreign carmakers, Tesla is particularly vulnerable to an increase in Chinese tariffs. Unlike GM, Ford, BMW and Daimler, the Palo Alto, California-based company has no manufacturing plant in China. Tesla has been working with Shanghai's government since last year to explore assembling cars in China, but has yet to reach a definitive agreement.