SEOUL (REUTERS) - In its rush to beat rival products to market, notably Apple's new iPhone, Samsung Electronics has accelerated new phone launch cycles, but its haste is raising concerns that it fell short on quality testing.

Since last year, the South Korean firm, the world's largest maker of smartphones, has brought forward the launch of its Galaxy S and Galaxy Note series models by roughly a month.

For the June quarter, the strategy helped Samsung to its best profit in more than two years, but it is also putting strain on its supply chain and its manufacturing reputation.

On Friday (Sept 2), two weeks after launch, Samsung recalled Galaxy Note7 smartphones in 10 markets including South Korea and the United States after finding its batteries were prone to ignite, and halted sales of the 988,900 won (S$1,215) device in those markets indefinitely.

The recall looks set to hamstring a revival in Samsung's mobile business just as Apple gears up to launch its new iPhones this month.

"Samsung might have over-exerted itself trying to pre-empt Apple, since everybody knows the iPhones launch in September," said Chang Sea-Jin, business professor at Korea Advanced Institute of Science and Technology and author of "Sony vs. Samsung", a history of the electronics giants. "It's an unfortunate event; it feels like Samsung rushed a bit, and it's possible that this led to suppliers also being hurried." 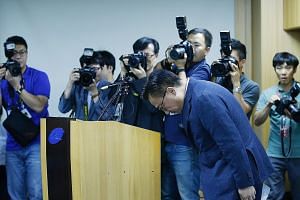 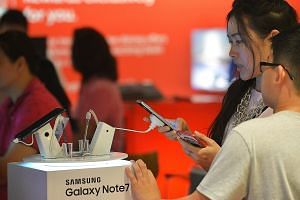 Samsung said in a statement to Reuters it conducts "extensive preparation" for its products and will release them to the market "only after proper completion of the development process".

The firm said on Friday it had identified a problem in the manufacturing process of a battery supplier it didn't name.

"I am working to straighten out our quality control process," Samsung's mobile business chief Koh Dong-jin said then.

The scale of the unprecedented recall, which some analysts forecast will cost Samsung nearly US$5 billion in revenue this year, follows a separate supply-chain management issue that led to disappointing sales of the Galaxy S6 series last year.

Samsung executives said production problems for the curved screens and metal casings used in the Galaxy S6 edge led to a supply shortage for the device, leaving the firm unable to capitalise on the critical acclaim the phone received, sapping earnings momentum.

Counterpoint analyst Jeff Fieldhack said Samsung stole the thunder from local rival LG Electronics' launch of the G5 smartphone this year by starting the sales of the Galaxy S7 smartphones a month earlier and backing them with an aggressive marketing campaign.

"I believe they were trying to create a similar effect by beating Apple to market by (about) a month, too," he said. "Very often, lab times and testing periods are shrunk to expedite approval and time-to-market of key devices. It is possible all charging scenarios were not thoroughly tested."

Samsung SDI, one of two makers of batteries for the Note7 - the other has not been identified - said it had not received notice from Samsung Electronics regarding its batteries and declined to comment further, including whether its batteries were found to be faulty. The company declined to comment on a local media report that it had production difficulties and struggled to meet orders in time.

While there are occasional reports of phones catching fire or burning users, recalls for such problems are rare. The problem is exacerbated by the fact that batteries in the Galaxy Note7 can not be removed by the user - a design decision to make the phones slimmer and waterproof.

A Samsung executive who declined to be named told Reuters before the recall announcement: "Our production engineers and managers are extremely experienced, and if you ask them to find a solution to adopt a design change, they'd promptly bring things under control. "But even that capability is under growing strain, as we try out new materials and everything is on a very tight schedule."

Local brokerage Korea Investment cut its third-quarter operating profit forecast for Samsung by 1.1 trillion won to 7.1 trillion won due to the recall, though it said the event would not derail the broader rebound of its smartphone business.

If haste contributed to the problem, it could now help Samsung limit the impact of the recall.

Shares in Samsung were up 0.8 per cent in mid-day trade on Tuesday (Sept 6), 4.4 per cent below record highs reached two weeks ago, as some investors welcomed the swift decision to launch a global recall.