The mall will welcome shoppers again on June 28, two months ahead of its original schedule after a three-year redevelopment.

With a total gross floor area of 887,000 square feet, the Funan integrated development comprises a shopping mall, two office blocks and lyf Funan Singapore - the Singapore flagship of The Ascott Limited's lyf co-living serviced residence, which is slated to open in the fourth quarter of this year.

Funan is located in the Civic District, with a direct underpass linking to City Hall MRT station.

The mall will house more than 180 brands, of which one-third are new-to-market, new concept stores or flagships. These include consumer tech firm Dyson with its first standalone store in Singapore, and British folding bikes manufacturer Brompton Junction's South-east Asian flagship store. Golden Village's seven-screen multiplex at Funan will feature two new seating concepts and virtual reality pods, while local theatre group Wild Rice will raise the curtains at its theatre and studio.

More than 30 per cent of the brands at Funan are new to CapitaLand's portfolio. 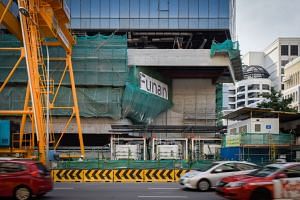 Will 'new' Funan still have the IT factor?

About two-thirds of the mall's brands also originated from Singapore, according to the release. They include artisan jeweller Carrie K's first standalone boutique, and fashion label Love Bonito's largest outlet in Singapore.

All brands will be clustered around six themes: tech, craft, play, fit, chic and taste.

Funan will have a dedicated community manager to "curate community experiences that consumers area passionate about, as it seeks to build social connections and networks beyond the transactional", said Mr Chris Chong, managing director of retail at CapitaLand Singapore.

"Funan's opening will relaunch the mall as a social space where people spend their time experiencing, discovering and shopping," he said.