SINGAPORE - Four months in as head honcho of South-east Asia's property giant CapitaLand, Lee Chee Koon has pulled off a mighty $11 billion cash-plus-shares deal - subject to shareholders' nod - to buy Ascendas-Singbridge (ASB) from Temasek Holdings that will vault the company into the largest diversified real estate group in Asia.

It took six months for the parties to conclude talks on the deal, said Mr Lee, CapitaLand's president and group chief executive, at a media briefing with the top management team on Monday (Jan 14).

"This was more like a dating process. Obviously, because it's a marriage, the courtship took longer. The whole discussion went on for more than six months," said Mr Lee.

On Temasek's role in the mega transaction, he replied: "Even though, they (Temasek) are major shareholders, we had to negotiate this deal based on what we thought made commercial sense as we are a listed entity with responsibility to all shareholders.

"That's why the negotiations weren't easy... but we reached an outcome that the management felt was good to help CapitaLand's transformational journey," he added.

ASB is essentially a provider of sustainable urban development and business space solutions such as business and industrial parks, logistics, warehouses as well as data centres. It also has substantial interest in and manages three Singapore-listed funds, namely Ascendas Reit, Ascendas India Trust and Ascendas Hospitality Trust, and manages a series of private real estate funds.

The deal will create a group with a combined total assets under management exceeding $116 billion. 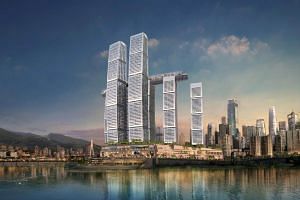 "CapitaLand 1.0 was about regionalisation - from Singapore, the company moved into China and parts of South-east Asia. Under 2.0, there was a lot of consolidation and strengthening of the back-end and laying the foundation for future growth. CapitaLand 3.0 is about the company's global ambition - to build different asset classes in various markets to turn into a global real estate player," he said.

He acknowledged that there may be some concerns among investors that as a result of the transaction, CapitaLand will be even more complex.

"I would like to present it in a different perspective. The company really has three key earnings drivers," he said, referring to property development, fund management and lodging businesses.

Geographically, the deal strengthens CapitaLand's presence in its core markets of Singapore and China, while adding meaningful scale in India, the United States and Europe.

In the fund management space, the deal could bump up CapitaLand's fee income by a hefty 40 per cent, with a range of different assets and markets that could hold possibilities of creating new funds or new real estate investment trusts to drive earnings forward, he added.

As for the third link - lodging business - he said it was "very global in nature and one we can scale" and at some point, if it grows to a certain scale, the company may consider liquidating options or even a spin-off.

"The success of the transaction is really about integration - are we able to integrate the business together with the people and culture so we can unlock the synergies and values underlying the portfolio and continue to drive good returns on a sustainable basis for the combined entity?