NEW YORK (NYT) - As the new chief executive of Boeing, David L. Calhoun will take on one of the most challenging tasks in corporate America: steering the embattled airplane manufacturer out of a crisis that has consumed it for more than a year.

Boeing's best-selling jet, the 737 Max, has been grounded for 10 months after two deadly crashes exposed serious flaws in the jet's design and led to scrutiny of the company's manufacturing process and its dealings with regulators, as well as to accusations that it overlooked safety concerns in its competitive zeal.

But while the magnitude of the task has little precedent, this is not the first time that Calhoun, who has long-standing ties to the aviation industry, has had to navigate a period of corporate turmoil.

Over decades as an executive at companies like General Electric (GE), Nielsen and Blackstone, he has been hailed as a "turnaround specialist" and described by colleagues as an experienced and decisive operator.

Calhoun, 62, started his career at GE, rising to run the company's airplane-engine business in the aftermath of the Sept 11, 2001, attacks. Later, as chief executive of Nielsen, he was credited with rebuilding the data and information firm after a private-equity takeover. And in 2017, he was made chairman of the board of Caterpillar as the construction equipment company faced scrutiny from the federal government over its tax and export practices.

"He's somebody people trust," said Kevin Sharer, a former chief executive of drugmaker Amgen and a close friend of Calhoun's who overlapped with him at GE. "He doesn't bring emotion. He brings logic and conviction."

Calhoun will replace Dennis A. Muilenburg as Boeing's chief executive on Jan 13, the company said Monday. A member of the company's board of directors since 2009, he became chairman in October when Muilenburg was stripped of that title as the company continued to struggle in the aftermath of the crashes - one in Indonesia and the other in Ethiopia - that left 346 people dead.

Since he joined GE after graduating from Virginia Tech in 1979, Calhoun has built a career on firm decision-making and an ability to execute ambitious strategies step by step, according to interviews with former colleagues.

He thrived under the mentorship of GE's longtime chief executive, Jack Welch, and became known as a blunt and forceful leader. When he settled on a decision, he pursued it relentlessly, former colleagues say. 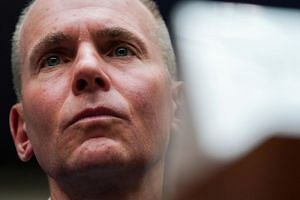 How the 737 MAX production freeze affects airlines across the globe

"He was very, very clear in his communication," said Paul Mirabella, who ran GE's global diagnostic imaging unit from 2003 to 2006. "If you worked for David, you were never confused about what the mission was."

Toward the end of his tenure at GE, Calhoun was courted by a number of major companies. In 2006, The New York Times reported that it was "common knowledge among analysts" that Boeing had offered him the chief executive job a year earlier. But Calhoun decided to take over Nielsen, which a group of private equity firms had acquired.

There, he streamlined the business by selling several magazines, including The Hollywood Reporter and Billboard Magazine. He also recorded a major victory in 2011 when Walmart agreed to share consumer sales information with Nielsen after keeping the data private for many years.

In 2017, Calhoun took over as chairman of Caterpillar shortly after federal agents raided the company's headquarters. And he has led the portfolio-operations group at Blackstone since 2013.

"Dave is an incredibly capable, super talented executive," said Jonathan Gray, the president and chief operating officer at Blackstone. "I'm sure Boeing saw in the boardroom how capable he was."

At Blackstone, Calhoun was involved in discussions with senior executives about the firm's new life sciences initiatives, which were unveiled in 2018. At a meeting three years ago, most of the officials in the room spoke in broad strokes about the future of health care, recalled Sharer, who was at the meeting. But not Calhoun. He focused on the nuts and bolts: Where do we invest? Whom do we hire?

"We're all dreaming about how beautiful the cathedral is going to look," Sharer said. "And he kept saying, 'How are we going to build it?' "

Throughout Boeing's crisis, Calhoun has been the face of the board, often reaffirming its support for Muilenburg in media appearances. But it was never entirely clear whether he had his eyes on the top job.

In an interview with Virginia Tech Daily in 2018, Calhoun emphasised his desire to maintain an even work-life balance, noting that he learned the importance of setting aside time for his family from one of his mentors at GE.

"He had found this wonderful balance. He clearly told me how imbalanced I was," said Calhoun, who is married and has four children. "I can probably work around the clock, but that's not a healthy thing, and you miss out on a lot."

Still, over the course of his career, he has repeatedly shown an appetite for new challenges. In 2010, he told an interviewer that he had left GE partly because he had wanted "a little anxiety" in his professional life.

He will get plenty of that as chief executive of Boeing. Over the past year, the company has faced intense criticism from regulators, Congress and the families of the people who died in the two crashes. 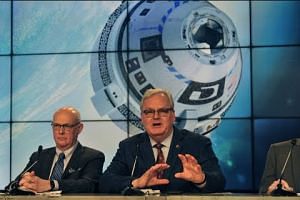 Last week, Boeing temporarily suspended production of the Max, disrupting a vast international supply chain that stretches across thousands of companies. Calhoun spent much of Monday speaking with Boeing's customers and government regulators, as well as other public officials, a Boeing spokesman said.

In an interview with The Times in May, Calhoun made clear what he viewed as Boeing's main priority.

"There's really only one thing to do, and that's to get a safe airplane back up in the sky and let it fly," he said. "I mean, that's really all we can do."