NEW YORK (WASHINGTON POST) - Facebook shares plunged more than 19 per cent on Thursday (July 26) after the company warned the day before that its sales growth would stall in the months ahead.

And the sell-off is poised to break another record, experts said. Facebook's falling stock price has erased more than US$110 billion (S$150 billion) in market value - the largest one-day loss of any publicly traded company.

Investors began to panic after the social media company said during an earnings call on Wednesday that revenue growth would continue to decelerate for the rest of the year.

Facebook attributed the weaker outlook to unfavourable currency conditions, investments in new products and bolstered privacy tools that may put the brakes on breakneck revenue growth.

Chief financial officer David Wehner said he expects the decline to register "high single-digit percentages" for both the third and fourth quarters.

The company also said for the first time that 2.5 billion people use at least one of its apps each month, including the core Facebook service, Messenger, WhatsApp and Instagram.

But the number of American users who use Facebook every month has flatlined, the company reported, raising questions about how much longer the social network can continue to expand in the US market.

Overall, Facebook grew its global users by 11 per cent from the same time last year. 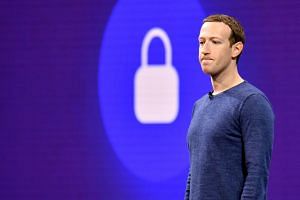 The company's earnings report showed that it is not immune to repercussions from the barrage of privacy scandals and the costs of combating abusive accounts and misinformation that it has faced.

"We run the company for the long term, not just for this quarter," he said.

Zuckerberg emphasised the investments the company has made to improve safety and security on the platform. And he reiterated a point made during earlier calls: That Facebook's profitability will suffer because of its heavy investments in security.

"We're starting to see that this quarter," he said.

Analysts said that a confluence of factors explained Wall Street's recoil: the lower-than-expected revenue guidance; slimmer margins; and the reverberations of the Cambridge Analytica scandal, in which the data consultancy affiliated with the Donald Trump presidential campaign inappropriately siphoned the private data of tens of millions of Facebook users.

Twitter, which reports earnings on Friday morning, saw its stock drop by more than 3 per cent by 12.43pm Eastern US time. Snap's shares were down by more than 2 per cent.