NEW YORK (REUTERS) - A plunge in Facebook's shares pushed the Nasdaq down more than 1 per cent on Thursday (July 26), the index's biggest one-day drop in a month, but industrial stocks rose after the United States and the European Union said they would negotiate on trade.

The decline in Facebook shares weighed on the S&P 500 technology index, which dropped 1.6 per cent.

Shares of Amazon.com, another member of the so-called FANG group of momentum stocks, fell 3 per cent and were the second-biggest drag on the Nasdaq and S&P after Facebook. In after-hours trading, they were modestly positive in volatile trading following the company's quarterly results.

Shares of Twitter, scheduled to report its quarterly results on Friday, slid 2.9 per cent.

But while the Nasdaq and the S&P 500 slumped, the Dow rose, in part on the strength of industrial stocks.

Industrials, which have been a bellwether of trade tensions, were lifted after US President Donald Trump and European Commission President Jean-Claude Juncker agreed to work to resolve US tariffs on steel and aluminum and Europe's retaliatory duties.

S&P 500 energy stocks also advanced, ending the session up 1 per cent, as oil prices rose on the disruption of some of Saudi Arabia's oil shipments.

"What we're seeing is the market broadening out, which is healthy," said Quincy Krosby, chief market strategist at Prudential Financial in Newark, New Jersey. 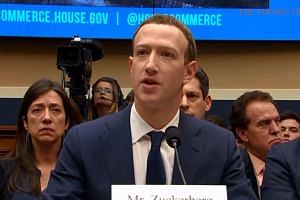 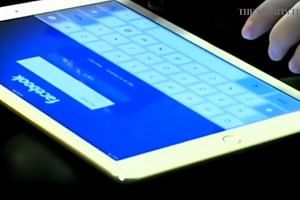 Another drag on the S&P and Nasdaq was Biogen, whose shares tumbled 10.2 per cent as trial data from its Alzheimer's drug failed to impress investors.

McDonald's shares dipped 1.7 per cent after the fast-food chain missed US same-store sales estimates for the first time in at least two years.

Chipmakers, however, were a bright spot amid Thursday's declines. The Philadelphia SE Semiconductor Index rose 1.9 percent.

Shares of Qualcomm gained 7 per cent after the chipmaker pulled its US$44 billion (S$60 billion) bid for NXP Semiconductors NV upon failing to win Chinese regulatory approval. NXP shares dropped 5.7 per cent.

Advancing issues outnumbered declining ones on the NYSE by a 1.33-to-1 ratio; on Nasdaq, a 1.21-to-1 ratio favoured advancers.

Volume on US exchanges was 7.05 billion shares, compared with the 6.06 billion-share average for the full session over the last 20 trading days.