SINGAPORE - Finnish energy giant Neste will be expanding in Singapore, extending its capacity to develop renewable and sustainable products.

The firm, which is ranked one of the top three most sustainable companies in the world by the Corporate Knights' Global 100 Index, held a foundation stone ceremony on Wednesday (July 31) to officially mark the extension of the new production line in Tuas.

"It is a major step forward not only for Neste, but for Singapore's energy and chemicals industry, and for our two countries' mutual quest to grow, and help the world grow, in an environmentally sustainable way.

"Such innovations are critically needed today in our efforts to tackle climate change."

Neste's renewable diesel delivers up to 90 per cent reduction in greenhouse gas emissions compared to fossil diesel and can be used directly by existing engines.

"Without innovations to create efficient, affordable and scalable forms of clean energy, the cost to economies and societies of transiting to clean energy will be far higher. It will then be far more difficult to secure the necessary political commitment in any democracy to make that transition," Mr Tharman said.

Mr Tharman was joined by dignitaries from the Finnish embassy, Singapore Economic Development Board and JTC Corporation and Neste president and chief executive Peter Vanacker. 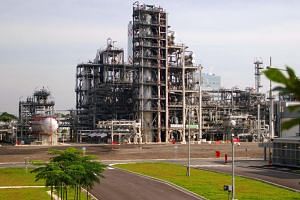 Biofuel firm Neste to invest $2.2b in Singapore production

Aussie solar farm project aims to power up S'pore too

Powering up clean energy on Semakau

It will make the Singapore plant Neste's largest renewable products plant and account for about half of its global production capacity, Mr Tharman noted.

The expansion follows an investment of S$2.1 billion by the company. Construction on the expanded facilities started at the beginning of the year and the firm is to start up the new production line in Singapore during the first half of 2022.

Mr Tharman added that the Neste facility here will help the firm to move along in its sustainability journey.

It will expand its product slate beyond renewable diesel to jet fuel. Mr Vanacker noted that the expansion will enable the production of over one million tons of renewable jet fuel

The Singapore facility will also be equipped with innovative capabilities to process a wider range of feedstock, including dirtier waste animal fat and residual plant oils, to make the process more cost efficient as well as environmentally friendly.

"Neste will also add to our efforts to develop the circular economy. I understand that in its next phase of development, the company is exploring ways to use liquefied waste plastic as a future raw material for its refining processes," Mr Tharman said.

"We are very keen to partner Neste in this new and exciting possibility for converting waste to energy."

He added that Singapore also has an ideal workforce pool that the firm can tap on. Once completed, the facility will employ more than 100 new local professionals.

"We are determined to serve our customers and the industry in reducing carbon emissions," Mr Vanacker said.