Stocks rallied shortly after the Fed kept interest rates unchanged and released a forecast for no interest rate hikes in 2019, a shift from an earlier projection of two increases this year.

But stocks pulled back after a press conference at which Fed Chair Jerome Powell emphasized that the US economy remained solid, even as the central bank trimmed its growth outlook for 2019.

The Fed's dovishness "invites some concerns about what it really implies about the global economic outlook," O'Hare told AFP. 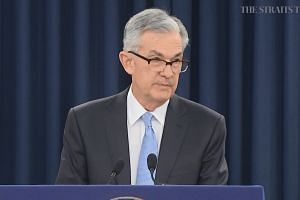 US Fed now expects no interest rate increases in 2019

It raises the possibility "that US economy will disappoint," he said, adding that low interest rates could depress bank lending.

Cresset Wealth Advisors' Jack Ablin said the retreat in US stocks showed "investors are beginning to infer that the global economic slowdown is washing up on our shores."

But large tech companies rose, including Apple, which won 0.9 per cent, Facebook, which advanced 2.4 per cent and Netflix, which surged 4.6 per cent.

Alphabet rose 2.1 per cent despite a €1.45 billion fine against its Google business by the European Union's anti-trust regulator over its AdSense advertising service.