LONDON (BLOOMBERG) - Deutsche Bank is doubling down on a bet that troubled commodities trader Noble Group Ltd will be able to pull off a US$3.5 billion (S$4.79 billion) reorganisation.

With less than a week to go before Noble shareholders vote on the debt-restructuring plan, the German lender's London office is offering to buy the company's senior unsecured bonds for 45 per cent of face value, according to a memorandum seen by Bloomberg. The bank says any purchases would be on behalf of itself, and that the tender process will increase support for the restructuring as any notes acquired would be committed to the restructuring.

Deutsche Bank emerged as a key backer of Noble's turnaround as existing lenders shed exposure to the commodities trader. It was one of the initial creditors to sign onto the restructuring in March, agreeing to help provide Noble with US$600 million in trade finance and a US$100 million hedging facility. The German lender, along with ING Bank, held about 4 per cent of existing senior claims as at March, according to a statement at the time.

"Deutsche Bank is a finance provider to and active supporter of the proposed restructuring of the Noble Group," Deutsche Bank's Singapore-based spokesman Sarah Stabler said in response to questions. "The tender is part of Deutsche Bank's normal market making activities."

By offering to buy more of the debt, Deutsche Bank is essentially betting that investors are underestimating the potential payoff of owning a reorganised Noble. The deal, in which creditors will swap their existing holdings for equity and new debt, would hand creditors a 70 per cent ownership stake. Existing equity owners, including top shareholder Richard Elman, would have their stakes diluted.

Elman, who started the company in 1980s Hong Kong as a small middleman to steelmakers before expanding it into a global conglomerate, has committed to vote in favour of the plan. The company also has irrevocable support from Abu Dhabi-based shareholder Goldilocks Investment Co and a consortium including Value Partners Ltd and Pinpoint Asset Management Ltd.

A spokesman for Deutsche Bank in London declined to immediately comment on what it thinks it could recover on its debt holdings. Noble didn't immediately reply to request seeking comment through its external public relations representatives in Singapore. 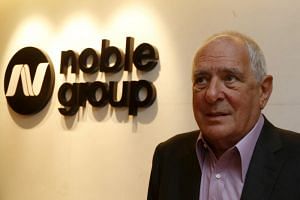 Noble's 2018 notes rose 1.9 US cents to 46.7 US cents on the dollar as at 2.10pm in Hong Kong, while its 2022 notes gained 0.6 US cent to 47.9 US cents, according to Bloomberg-compiled prices. Those prices were in line with their average levels over the past two months. The company's shares surged 21 per cent in Singapore, set for the biggest rally in about two months.

Noble is approaching the end game in its drawn-out restructuring after years of crisis, public sparring with investors and billions in losses that culminated with a March default on its debt. KPMG has warned that failure to secure the restructuring plan could end in a liquidation that would give creditors as little as 20 per cent of face value.

Deutsche Bank's tender offer for the bonds expires on Aug 24 and Noble shareholders are set to vote on the plan on Aug 27. The Wall Street Journal first reported on the offer on Friday.

If the bank were to purchase bonds from undecided creditors, it would shrink the roughly 14 per cent of holdings that hadn't been pledged to back the restructuring deal. The offer includes Noble's US$379 million of 3.625 per cent notes that were due in March, as well as US$1.18 billion of 6.75 per cent bonds maturing in 2020 and US$750 million of securities due in 2022.